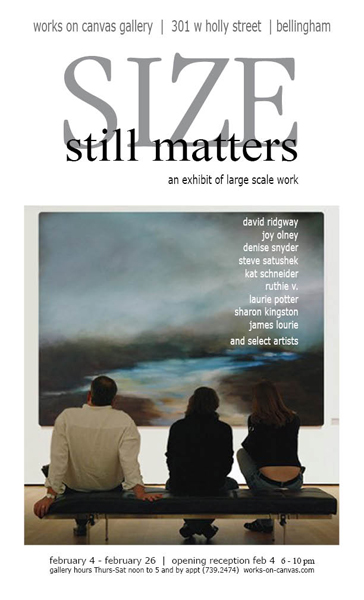 Works on Canvas Gallery announces the upcoming group exhibit Size Still Matters for February 4 - 26, 2011. Featuring large scale work by invited artists, this exhibit responds to the plethora of small works exhibits that are a result of the current economic climate. This exhibit hopes to both pose the question "does size matter?" and grant permission to artists to again work big.

Online PR News – 14-January-2011 – – Bellingham, WA - Works on Canvas Gallery invites the public to a group invitational exhibit, Size STILL Matters. The show of large scale artwork opens February 4th from 6 to 10 pm at 301 W. Holly Street in the Bay Street Village Building in downtown Bellingham. Exhibiting artists will be in attendance for the opening night reception, which coincides with downtown Bellingham’s First Friday Artwalk. Additionally, there will be a silent auction for a small selection of the “sizeable” works.

This is the second installment of a large scale works exhibit at Works on Canvas. The show was first conceived in January 2010 by Works on Canvas’ resident artist, Sharon Kingston, as a response to the epidemic of miniature and small works exhibits that have restricted artists during the current economic recession. Artists who traditionally worked large have had to reduce the size of their work to make it more affordable. Recognizing that size does matter to an artist--and to the viewer’s response to the artwork, artists were invited to create works at least 4 feet in one dimension.

Enlarging a work of art brings it back toward life and gives us a sense of being in the painting, suggesting intimacy rather than intimidation. Big art does not so much overpower us as it seems to exist on our level--to be equal with us. Effective utilization of scale is a means for the artist to create the illusion that art is alive, has its own energy--that it exists as if breathing.

Participating artists include David Ridgway, Joy Olney, Denise Snyder, Steve Satushek, Ruthie V., Laurie Potter, Kat Schneider, James Lourie and Sharon Kingston. For some of these artists, creating a work of this scale was virgin territory and a challenge worth meeting. For others, the exhibit granted permission to get back to the joy of immersing oneself in a life-size canvas.

Works on Canvas is the storefront studio of Bellingham based painter Sharon Kingston. The studio/gallery opened in June 2008 and hosts exhibits of local artists’ works in addition to serving as a working studio. The gallery is open Thurs - Sat, noon to 5 pm and for Bellingham’s First Friday Artwalk 6 to 10 pm. 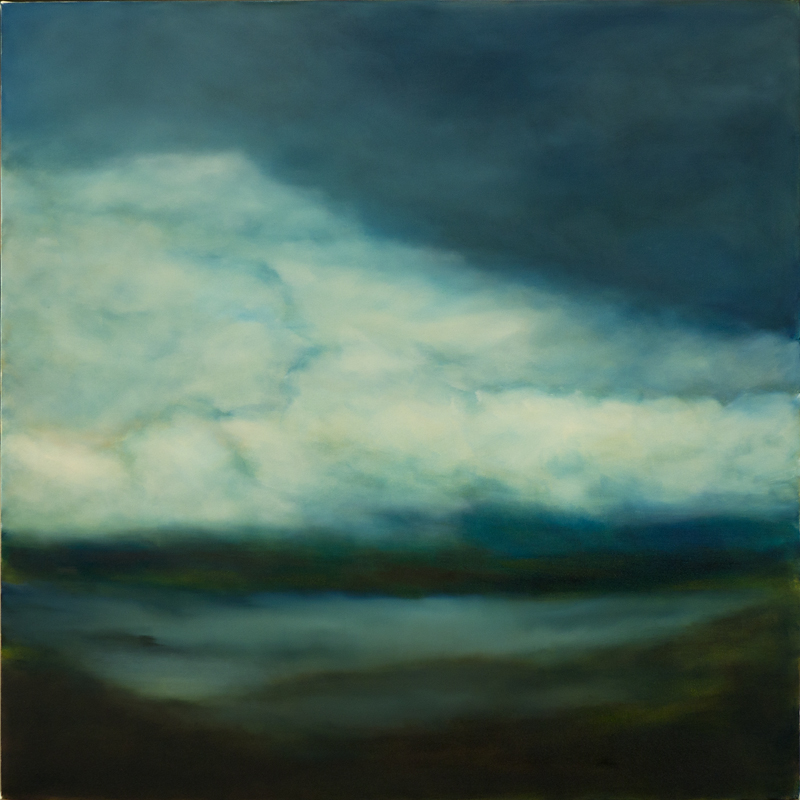