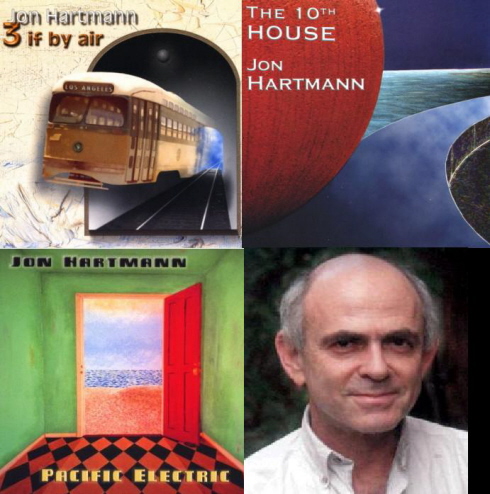 Global Warming. Everyone is talking about it. Musician Jon Hartmann just launched a YouTube channel to share the message with his music about our Earth and our responsibility on it.

Online PR News – 22-April-2009 – – Los Angeles, CA --- Protecting the planet. While this is a responsibility we all should take on, most people only benchmark it by the earth day listed on the calendar. For Musician/Environmental Activist, jon hartmann, everyday is Earth Day and he has been taking his responsibility seriously. Hartmann was recently elected Chair of the Transportation Committee of the Hollywood Hills West Neighborhood Council, an activist on ARCO’s “Citizens Advisory Committee for Rapid Transit.” Hartmann has incorporated his environmental beliefs and activism in his music and has just released three new videos sharing his music on www.YouTube.com/jonhartmannmusic. His albums 3 IF BY AIR, THE 10th HOUSE and PACIFIC ELECTRIC are gaining new attention by way of social networking at www.myspace.com/jonhartmannmusic after his year-long promotion of his historical time capsule CD, featuring blunders of the Bush Administration in GEORGE BUSH SINGS.

Hartmann has been an advocate for passenger rail since 1967, when his attorney brother took him inside the Subway Terminal Building in Los Angeles. Seeing the graveyard of the world's largest urban rail system had an effect on Jon, and he was soon to find out that General Motors, Standard Oil, Mack Truck and Firestone Tires were busy in a "criminal conspiracy to monopolize ground transportation." He points out that other than the movie about Roger Rabbit, no one has dared to offend the auto industry by talking about what happened, and what continues to happen.

“I played in the band at the Los Angeles Coliseum for Earth Day somewhere about 1985-90...I remember it because the headlining act was M.C. Hammer, and I did not know who he was at the time. The crowd did. I believe in what Earth Day stands for ever since I was a kid growing up in smoggy Los Angeles. I remember having trouble breathing when the skies turned that special shade of grayish brown. Earth Day is a reminder of our responsibility to protect our planet, and to educate people on the interconnection of man and nature. Like any holiday, a celebration can be subverted and exploited, but because Earth Day has such a special meaning for the political Right, it can serve at least as a lightning rod for the discussion of issues and the raising of awareness. By definition, because Earth Day celebrates responsible consumerism and limited development, it is harder to hijack it's message,” explains Hartmann.

Hartmann is passionate and driven to share his viewpoint that fossil fuels have no place in our future and it has been a big part of his music composition as well as album artwork in conveying this through his artistry. Hartmann’s album, PACIFIC ELECTRIC pays tribute to Los Angeles’ long-lost Pacific Electric Railway. Hartmann’s thoughts of energy, policy and interest of expanding rail service between and inside cities to promote healthier air are blended with his burning questioning and comprehension of the removal of the Pacific Electric Railway. His albums, 3 IF BY AIR and THE 10th HOUSE both feature CD cover graphics which reflect Hartmann’s passionate visual statement about the fragile nature of the orb we populate His concern and fear has been realized – as today it is evident. “If we burn fossil fuels at the current rate…our economy will be disrupted beyond repair, and our planet, likewise, may be damaged sufficiently to induce global catastrophe,” states Hartmann.

“Some folks really like the sound of the internal combustion engine. There are industries devoted to making auto engines as loud as legal or louder. There is an effective lobby in every wing of government that spends money on politicians to insure that the interests of rubber tires, gasoline, oil and concrete get taken care of. Even though the United States was taught a nasty lesson about oil volatility in 1973, we pretend that depending on other people for our livelihood is not a bad move. We learned nothing from our history, and are damned to relive it with a vengeance. The ability of car makers to produce alternate vehicles is not in question. Electric cars were made 100 years ago. The issue is that oil companies do not want to make a change in their structure and direction. As soon as fuel production is democratized, giant corporations begin to lose their monopoly on transportation. It could be very easy to show people the advantages of electric cars. Control of the media by oil, however, makes that information unavailable to the public. A car called the Tesla was recently produced in California, and it was faster than almost all gasoline engine cars. If the Tesla were mass produced as a family car, it could be sold at lower cost than Big Three vehicles because electric motors are much simpler than gasoline engines. Let's guess who doesn't want alternatives to oil?” Hartmann continues.

Hartmann is a songwriter, musician, producer, music publisher and record label executive whose career has encompassed touring the world. From his first overseas gig in Southeast Asia to entertain soldiers for the USO, to performing with Ike & Tina Turner in Germany with the Rolling Stones as audience spectators. Jon was signed as a writer in 1975 for Peacock Music, where he and Jimmy Whitney co-wrote "Goodness Knows," recorded that year by Michael Jackson. His successful career also includes performing with Dee Dee Bridgewater, the Staple Singers, Sal Marquez, Phil Chen, Cathy Segal-Garcia, Jaye P. Morgan, Morey Amsterdam, Barry Zweig, Arthur Lyman, Bobby Womack, Eartha Kitt and many others. He’s currently producing his own works and others on his own independent label, Jon Hartmann Records.

To listen to tracks and get the CDs - go to www.cdbaby.com/jonhartmann For interviews, review copies and additional information, contact Stacey Kumagai 818-506-8675 or mediamonster@yahoo.com