Survive the apocalypse or endorse it. Evolution Vault, developer of browser based games, announces today the release of a new game.

Iasi, Romania – Evolution Vault, developer of free online strategy games, releases Rage of War: Chronos. After reaching the milestone of 50,000 registered players with Xeno and Asgard, the developer seem to thrive on the browser gaming scene. Question is: what is so different about this new game?

"At the beginning of 2011 I have a dream: to create the most competitive browser game out there, a game in which the action is very fast, without the usual build time waiting that all current browser based games have. I want to impose real time response for player actions in the game and to instantly rewarded players for all the loot they make." said Radu Soldan, CEO of Evolution Vault)

ABOUT RAGE OF WAR
In Rage of War: Chronos, players take on the role of alien Commanders who can turn into honorable heroes or destroyers of worlds. They will travel to alien worlds through Stargates, rebuild pyramids to colonize new planets; the possibilities are endless. Far away in the universe, two fully developed alien species wage a full-scale galactic war for centuries. Highly efficient killers with the sole purpose of consuming all living, the Draco have assimilated millions of species throughout the galaxy, in order to thrive and modify their surroundings. The Draconians are the destroyers of worlds, sworn enemies of the Altarian people.

Almost wiped out by their predators, the Asgardians did the unthinkable: using an alien artifact of unknown origins, they thought they finally got the edge they were looking for. The Chronos device was supposed to accelerate all their building processes, in order to keep up with the fast spreading hive clusters. However, the device malfunctioned and its range of effect increased to a handful of galaxies. With Draco now evolving chaotically, the last stronghold of the Altarian race is doomed to extinction on hyper speed. For those who still enjoy playing war strategy games in their browsers, Rage of War: Chronos is a must play.

GAME FEATURES
- No downloads are necessary, plays in any Web browser and it is free.
- Instant build of the base, extremely fast trading routes and troops training.
- On the ground, player troops will attack the other planets through Stargates.
- In space, carriers will transport ships across countless alien worlds.
- Takes only 5 minutes to learn and can become extremely addictive over time.
- Incredible strategic, a dynamic game with alliance oriented game play.

To register and to find out more about Rage of War, head over to this registration page that will give players special bonuses for a limited amount of time:
http://www.onlinestrategygames.asgardheroes.com/register_bonus.php

ABOUT EVOLUTION VAULT
Evolution Vault was established in October 2005 as an independent developer of computer games. Today, Evolution Vault is expanding its territory towards free browser based games with Xeno, Asgard Heroes, Draco and Rage of War, while focusing in providing a consistent gaming environment for players worldwide. 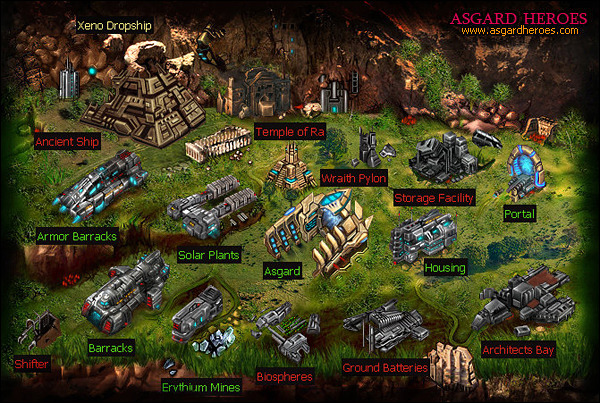 Asgard Heroes in Space. Houston, We Have a Game!
Download now