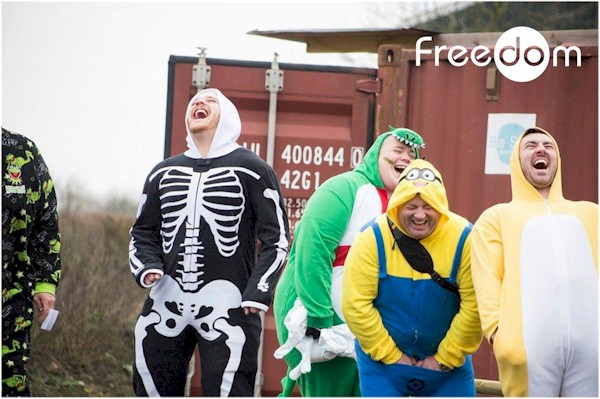 Stag weekend abroad having a laugh at the brexit vote

Stag and Hen parties go wild, the 2008 financial crisis saw an 18% increase in Freedom buiness and then Brexit vote in 2016 has seen a 33% increase - but why?

Online PR News – 20-April-2017 – London, UK – Freedom have been at the forefront of the stag and hen industry since they launch the first specialist website in 1996. It has been a journey with many twists and turns, but it always seems to confound the markets.

2008 FINANCIAL CRISIS
When all stocks were heading South at an alarming rate in 2008, the stag and hen market leaders Freedom were seeing double digit growth of 18%. Mike the MD of Freedom has a few reasons for this:
1) Weddings are booked on average a year in advance, with bride and grooms oblivious to the onset of financial Armageddon, they set their special day for 2008.
2) Friendship comes first, in fact when times are hard, the traditional UK hen weekends are a good excuse to let off some steam and party with friends.

2016 BREXIT VOTE
The UK was taken by surprise on 23rd June 2016 when we voted to leave the EU. Surely this uncertainty would deter the stag and hen market from travelling abroad, with the fear of the British pound falling off a cliff. But again Mike from Freedom explains what has happened. "In June 2016 we were -24% on EU booking value, but true to the great British spirit we have seen a total reversal and massive increases:
-6% July
+12% August
+34% September
+41% October
+44% November
+52% December

This has been surprising, but shows again how resilient stag weekends abroad and hen parties abroad are to the general market.