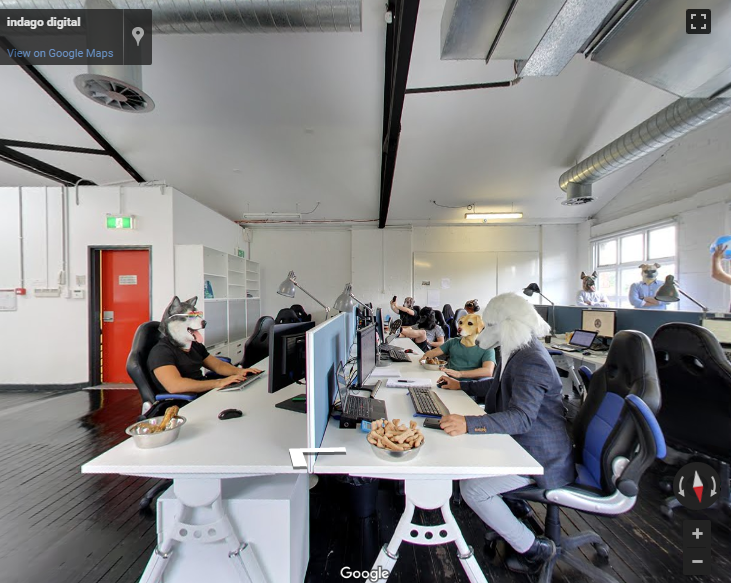 Indago Digital staff getting into character for Google My Business photoshoot

Online PR News – 17-March-2017 – Sydney – This week, Indago Digital, a Sydney-based digital marketing agency and one of AFR's Fast Starters in 2016, launched their Google My Business virtual tour in an effort to both demonstrate the creative opportunity businesses have with the feature, as well as show a lighter side to the typically data-dense digital marketing world.

The agency's Managing Director, Gary Nissim, had this to say, "Although the feature has been growing in popularity, especially in sectors such as hospitality, we're surprised it's not more prolific. Google continues to increase the amount it serves local listings and this is another way of optimising your listing whilst highlighting the quality of your premises to drive more customers in-store. The idea behind this exercise was to do something on-brand, tongue in cheek whilst highlighting the Google virtual tours…"

The company's dog-themed logo, emblematic of their mission to explore digital, hunt customers and investigate results, has become an integral part of their personality and identity following what has been dubbed by Google Trusted Photographer Alex Hitchcock of Virtual Eyes as, "easily one of Australia's most creative examples of the Google virtual tour feature."

A German Shephard wrote learning, "the cat downstairs is not a toy", a Basset Hound and Poodle playing ping-pong, and a trio of canines sharing cigars over a game of cards are just a couple of the scenes that comprise the company's office tour. Though more than just an exercise in flexing the right side of the brain, there's a lot of business value in providing this unique and interesting perspective.

In the past year, global search interest in virtual reality grew by 400% . That's nothing to sneeze at. But to dwarf that figure with something more directly pertinent, research carried out by Google showed that business listings with virtual tours are twice as likely to generate interest than those without. To make the idea even more enticing, toward the end of 2015, Google made it possible for virtual tours to be created without the need for a hired photographer.

The only thing required for any business to create and publish their own virtual tours is a relatively current smartphone. So the questions has to be asked, why isn't everyone doing it? With it being a relatively easy undertaking to achieve, and Google's guidelines on the virtual tour feature not overly restrictive on what can be done, this surely needs to be something that more businesses around Australia adopt in 2017.