The University of Southern Mississippi\'s new short game facility at Hattiesburg CC has been awarded a 2016 \"Design Excellence Award.\"

Nathan Crace, ASGCA Assoc., named a recipient of a 2016 "Design Excellence Award" by the American Society of Golf Course Architects

Online PR News – 14-November-2016 – Hattiesburg, Mississippi – The American Society of Golf Course Architects (ASGCA) has announced that member Nathan Crace, ASGCA Assoc, has been named a recipient of a coveted "Design Excellence Awards" as judged by his peers in the society. Crace was awarded the honor for his design of the University of Southern Mississippi's practice facility at renown Hattiesburg Country Club (HCC), a former PGA Tour stop located here in the Pine Belt region of the Magnolia State, for his creative design solution to the site and environmental stewardship.

"Awards from golf publications and magazines are always great," Crace explains. "But being honored for your work by your peers within the ASGCA is both special and humbling."

The project was completed in 2013 as part of a joint effort between the USM Athletic Department, Alumni, private donors, and the country club; but Crace says the planning of the project spanned years--and two different sites.

"[Men's golf coach] Jerry Weeks and I originally spent about a year studying a site at another club across town," Crace begins. "But in the end, HCC was closer to campus, had more room for what we wanted to create, and HCC is a higher-profile facility with a ton of history. It was the right decision to build the facility at HCC."

One issue that came up during clearing of the 3.5 acre site was a low-quality wetland that was unknown to the team and not indicated on any surveys. To make matters worse, the wetland was located almost directly in the middle of the site between the proposed short game green and the separate putting green where a large pipe was going to carry storm water from the adjacent street and beneath the fairway. Unwilling to pipe or fill the wetland, Crace felt the best way to work around the wetland was to actually improve it and make it a focal point of the new facility.

"What we discovered was a very low-quality and non-functioning wetland that was created by years of storm water runoff from the street adjacent to the site," Crace says. "But by shifting the short game green and lower fairway up the hill, we were able to actually expand and improve the wetland and now it functions as an integrated natural filter for runoff. And when it's in bloom, it's beautiful!"

In addition to being aesthetically pleasing and saving money and time, the improved wetland now provides visible delineation between the short game green and the putting green. The separation gives the putting green a feeling of isolation from the rest of the facility which features a long 9,000 sq ft green with multiple levels that can be played to from two different fairways nearly 180 degrees apart from each other. There are multiple green side bunkers and fairway bunkers which give players options ranging from green side chipping to full wedge shots from fairway, rough, or sand. When the teams are not using the facility, members at the club have been using it to sharpen their games. However, the USM men's team liked the facility so much that they won the first full-field event they played after working on their short games on the new facility for a few short weeks.

"The short game facility that Nathan designed for us has been a great asset," says Coach Weeks. "Not only in recruiting quality student athletes, but more importantly it's a great tool to prepare our current players with the many different short game shots that they'll experience in tournament play."

"This award would not have been possible without the help of a lot of others involved with the project," Crace says. "The members and staff at Hattiesburg Country Club, the University of Southern Mississippi's Athletic Department and Alumni, private donors, and the project contractor Landscapes Unlimited. It was a team effort from day one."

In addition to the project for USM at Hattiesburg CC, Crace credits his recent success with short game facilities (having completed a half dozen or so in recent years) in part to his previous occupation as a club professional while finishing college nearly 25 years ago.

"I taught myself how to play golf on a 'course' I built on my parents' land in Indiana when I was about 10 or 11," Crace explains. "I quickly developed a very good short game from all of the time I spent hitting balls there in my youth. Then when I began working as a club pro during college, I really enjoyed teaching people how to improve their short games. As a result, a part of my approach to design has always been trying to create as many options as possible for players to be creative. I've always felt that--when it comes to short game practice--the only limitation should be a golfer's imagination."

For more information about the American Society of Golf Course Architects, visit http://www.asgca.org

Nathan Crace Re-design Of The Refuge Wins 'Silver' As Runner- ... 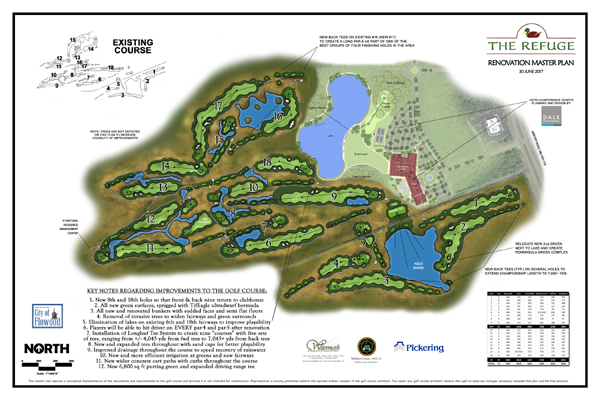