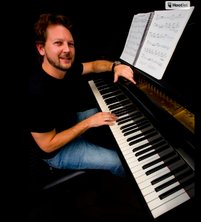 Online PR News – 03-November-2016 – Los Angeles – Composer Kenneth Burgomaster is anything but conventional, while some composers get into the habit of sticking to what they know best, the professional jazz musician loves experimenting with sounds and coming up unexpected scores.

It's true that he's known his catchy pop scores on countless Disney film & TV shows; however the work he did on the Aaron Tveit-Annaleigh Ashford Film, Better off Single displays his a more a combination of his mature and whimsical side. Comedy lovers rejoice! The New York City dating comedy that just arrived in select cinemas and on demand!

Finding out he'd been chosen to work on the adult comedy was exciting for the sound arranger, aside from working with celebrated music tastemakers, he'd also be scoring the cues for many of his favorite actors.

"I loved working on this film with such a funny/talented cast! I got to laugh a lot, but how could you not? The best part was getting to score music cues for some of my favorite actors from The Daily Show and Saturday Night Live (Jason Jones, Lewis Black, Chris Elliot and his daughter Abby), not to mention the talented Aaron Tveit," says Burgomaster.

Burgomaster has recently been working on revamping Disney's traditional sound on several of the channel's new projects, so finding out he'd be working on an ‘eclectic’ soundtrack for this film was a serendipitous surprise.

"I've been Playing with many unusual instruments and experimenting with new arrangements so when Chris Douridas and Chris Muckley – music curators and radio personalities at KCRW 89.9FM and SiriusXM Radio respectively - told me they were looking for an unconventional sound I knew it would be a great fit," recalls Burgomaster. "Knowing their background and having them select me to score this film felt really great and very proud of what we accomplished."

Better off Single is this month's newest rom-com staring Aaron Tveit (Next to Normal, Catch Me If You Can, Les Miserable), Abby Elliot (Saturday Night Live), and Kal Penn (Harold and Kumar go to White Castle).

The film follows Charlie, Aaron Tveit's character, as he rejoins the New York dating scene. His new beginning starts when he quits his job and breaks up with his girlfriend on the same day. While his decision to take action in his life feels liberating at first, comedy ensues when he begins dating and he starts questioning everything.

Like Benjamin Cox, the film's writer and director, Burgomaster feels excited to release movie that was not only fun to make, but includes a plethora of talented collaborators.

"We set out to make a smart, funny movie—one that would only be possible by the means of talented collaborators on both sides of the camera," said director Cox in an earlier statement.”

Catch the comedy flick on select theatres or on Amazon Video, Google Play and YouTube. Watch the trailer below: