One of the ISSA INTERCLEAN show’s keynote speakers will be advertising guru and TV personality Donny Deutsch, who in 2007 named the lotus as one of his Big Idea’s of the Month. Tersano founder, Steve Hengsperger was a featured guest on Donny’s hit CNBC show The Big Idea in 2008, where he discussed the truly remarkable lotus Cleaning System, specifically how it can replace most chemical cleaners. During the show’s taping Donny Deutsch went on to say “In effect you don’t need to buy another cleaning product…you get the Big Idea of the Month.”

lotus’ appeal is based upon the product’s ability to turn ordinary tap water into liquefied ozone, a powerful natural oxidizer. By adding an extra oxygen atom the lotus Cleaning System produces liquefied ozone, which is stronger and faster than chlorine bleach but without the toxic properties, residues, or fumes. It kills up to 99.999 % of most common bacteria, viruses, yet is safe enough to carry a 0-0--A NFPA rating and has achieved a perfect 50 out of 50 Toxics Use Reduction Institute (TURI) safety score because it turns back into oxygen & water after its job is done.

With companies and organizations looking for ways to be greener and cleaner for far less lotus offers a chemical-free, on-demand cleaning option. lotus has seen tremendous success across several industries including hotels, universities, casino resorts, retirement facilities, child-care, and others. Leading commercial customers include: MGM/Mirage Properties, the University of California, and the University of Montana.

With the cleaning power of heavy duty chemicals and a smaller carbon footprint than so-called “green” cleaners, lotus Chemical-Free Cleaning Systems are transforming the cleaning industry. lotus is the leading natural solution in the U.S.A. today. From safety, environmental, and effectiveness perspectives lotus Cleaning System is unique in the current marketplace. As well as being chemical-free and environmentally friendly, the lotus cleaning system is lower in cost by typically 30% or more when compared to chemical based and green cleaners. To schedule an appointment with Steve Hengsperger and lotus PRO team at the ISSA INTERCLEAN please email steveh@tersano.com or call 1-800-808-1723.

Tersano jumps out of Big Retail and into the Homes of Entrepr ... 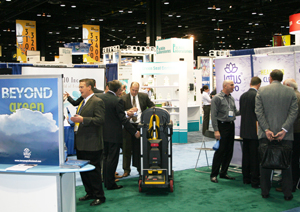