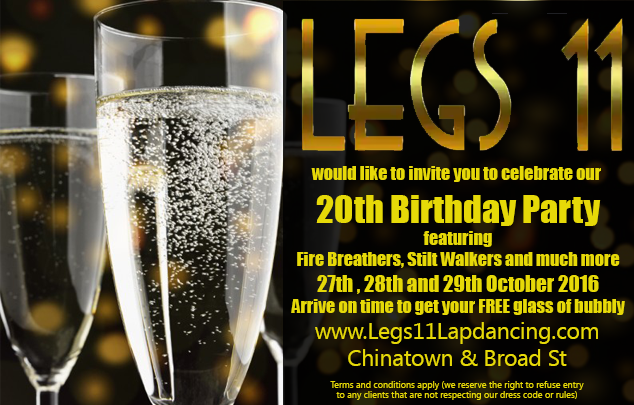 This October sees the 20th Anniversary of the start of Legs 11 lapdancing, there will be a champagne reception supported by fire breathers and stilt walkers

Online PR News – 11-October-2016 – Birmingham, West Midlands – In a time where there is a lot of news of businesses closing down, minimizing costs and negativity we have a Birmingham success story, a business that has lasted and grown with Birmingham, adapting to the changes in nightlife taste.

Established by the Taylor family in 1996, Legs 11 in what was then a quiet part of the city before chinatown became the hub of nightlife that it is today, a time when there was no arcadian and just a few bars / clubs. In the beginning a true family business, concept from the father, named by the mother and driven forward by the son's business acumen.

Legs 11 has continued success and growth, becoming a trend setter for many clubs that followed but few that have lasted the true test of time, being a destination for celebrities across the midlands and expanding to a 2nd site in Birmingham to cater for the broad st drinking crowd.

As Birmingham established itself as a hub of activity for the exhibition and concert market through the NEC, Barclaycard arena, Symphony hall (and more) visitors would flock to the city, it has become commonplace for them to mark Legs 11 as a destination to finish the night, not forgetting the girls would also help out at the shows working as promotional staff.

This October sees the 20th Anniversary of the start of Legs 11, a milestone that can not be ignored and must be celebrated, to commemorate this event there will be a champagne reception for all customers (arriving before midnight) and entertainment of fire breathers and stilt walkers throughout the birthday weekend.