Online PR News – 20-September-2016 – San Francisco, CA – Accessibility research goes from lab to App Store in the form of overTHERE – a free iPhone app that uses a unique gestural interface to give blind pedestrians quick and easy access to accurate location information about nearby businesses and other points of interest. Blind and visually-impaired pedestrians can now simply point their iPhones in any direction to hear what’s “over there.”

In 2011, Smith-Kettlewell initiated the Virtual Talking Signs Project, motivated by the possibility of leveraging mobile and cloud-based technologies to provide some of the benefits of infrared signage at a fraction of the cost. ”We wanted to see if we could use map pins as virtual signs and an iPhone as the virtual receiver,” said project lead, Dr. Miele. After several years of research and prototyping at Smith-Kettlewell, overTHERE was conceived in the summer of 2015 at a Google-sponsored accessibility MakeAthon in San Francisco. The event introduced prominent accessibility researcher Joshua Miele of Smith-Kettlewell to developers Dmitrijs Prohorenkovs and Ivette Doss of LABS301, to produce the first alpha version of overTHERE which won the event’s Improved Mobility prize. A year later, the team’s combined expertise in blind navigation, accessibility, haptics, and sensor integration brings this tool to the public with a simple yet powerful new way for blind people to find out what’s “over there.”

overTHERE uses a similar interface to Smith-Kettlewell’s historical Talking Signs and offers many of their advantages, but now the “transmitters,” are Google Places and the “receiver,” is an iPhone.

Smith-Kettlewell's work on overTHERE was made possible by a grant from NIDILRR supporting the Rehabilitation Engineering Research Center on Low Vision and Blindness. Please see http://www.ski.org, for further information on Smith-Kettlewell— an independent nonprofit research institute dedicated to problems in vision and blindness since 1963. 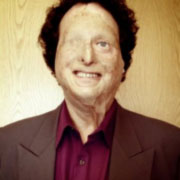 NIH-NEI Grant Awarded to The Smith-Kettlewell Eye Research In ...
visit our website