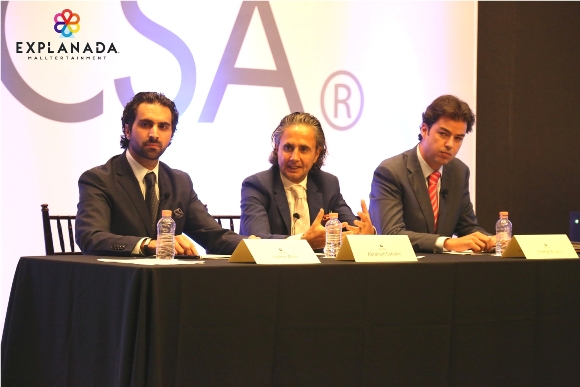 Online PR News – 09-September-2016 – Mexico City – GICSA announced a new and innovative concept in shopping centers called MALLTERTAINMENT that will revolutionize the retail industry and the lives of the Mexican community.

Founder and President Abraham Cababie believes this new concept, under the brand "Explanada", will respond to the growing needs of consumers. Its tagline, "live about everything" is based on its four leading factors: size, entertainment, community and mixed commercial use.

"In this new era we are living the people have changed their habits of consumption — that is why today we have an opportunity to see our industry under another optic, an optic focused on the community and good living," he said.

The project will be built on 185,000-square-meter space of land. A fair on the grounds will feature premier attractions including an impressive wheel of fortune and hot air balloon with a diameter of 14 meters, boasting a panoramic view of more than 10 kilometers.

There will also be a multifaceted show for 5,000 spectators, cinemas, a bowling alley, restaurants with 10 culinary offerings, live event spaces, and 2,400 parking spots. An important goal of the project is to create community through trade, entertainment, gastronomy, art, services and fashion.

MALLTERTAINMENT includes a space called "La Placita", the symbolic heart of "Explanada", which invites Mexican designers to exhibit their art, fashion and food to the public.

"The complex is expected to generate an estimated 2,500 jobs, both temporary and permanent, from groundbreaking to operation," said Rodrigo Assam, investor relations director of GICSA.

"The approximate investment for the first developments amounts to between 6 billion and 7 billion pesos," he added. "Explanada" will also offer a variety of services and shops, such as a medical center, banks, car agencies, supermarkets, gyms, outdoor green spaces, a hotel with 130 rooms, and a networking space for entrepreneurs.

"The concept of 'Explanada' focuses on the center of a city, and the logo, which depicts the hot air balloon and the wheel of fortune, symbolizes entertainment. Each color represents one of the experiences MALLTERTAINMENT offers," said Attie.

GICSA plans to open 14 shopping centers as attractions for visitors under the "Explanada" concept. The first complex opens in September 2017 in Puebla and there are currently four in development in Leon, Queretaro, Cancun and Pachuca.

Among its vast portfolio developed over the last 27 years GICSA has built more than 21 shopping centers.