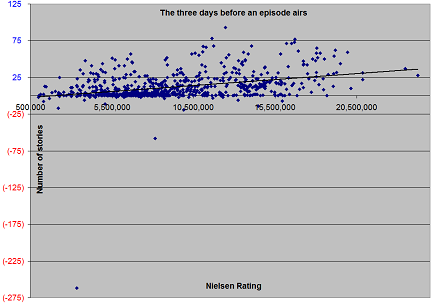 Online PR News – 25-September-2009 – – On January 15, 2009, CSI had one of its highest rated episodes all season. On that day, people published 26 new pieces of fan fiction, the most stories posted on the same day as an episode had aired. On September 25, 2008, CSI had it third lowest ratings day all season and people posted zero new stories on that date.

Fan fiction is a really popular outlet for fan expression of interest in television shows. The stories are creative, explore plot lines in the show and, according to many fans, help market a series in a positive way. Fans often argue that their activities mirror larger interest in a show, and that producers should pay more attention to them and cater to their fannish interests as the example provided seems to demonstrate. Fan Fiction’s Predictive Value for Nielsen Ratings tests this fan theory and answers the question: Does the volume of fan fiction published in the period around when an episode airs correlate to Nielsen Ratings?

To answer this question, fan fiction daily posting stats were gathered for the one week period around television shows where fan fiction communities existed and Nielsen Ratings were available for that show. The fan fiction data was compiled from six archives: FanFiction.Net, fanfiktion.de, FanWorks.Org, FicWad, SkyHawke, and Freedom of Speech Fan Fiction. The Nielsen Ratings data included over 720 episodes representing thirty-nine shows. Once this data was compiled, it was analyzed using Pearson’s Correlation and linear regression.

This information is potentially valuable to parties with a vested interest in a television show’s performance. By analyzing content patterns around periods with high volumes of fan fiction and high Nielsen Ratings, comparing that to periods of low posting volume and lower Nielsen Ratings, producers can make changes to maintain high interest amongst fans. Non-American television networks and advertisers can better predict how their shows will perform. This method of analysis can help organizations save money as it is cheaper to monitor and track than other analytic tools.