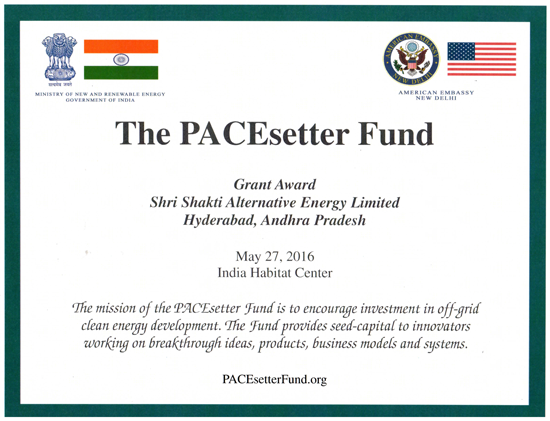 MNRE and US State Department have presented Shri Shakti a grant award for Remote Monitoring of Solar Pumps in India through PACEsetter Fund.

PACEsetter, acronym for Program for Advancement of Clean Energy, is a joint initiative of Govt of India and US State Department and is managed by Indo US Science and Technology Forum. These grant awards are given to scale up projects that hold significant promise for India’s development through the use of solar and other renewable sources of energy.

The award was given for the project, 'Remote Performance Monitoring & Outsourced Service Management of Solar Pumps and Off-grid Solar PV Plants 'Shri Shakti Alternative Energy Ltd, SSAEL, intends to scale up the innovative program launched by the Govt of Rajasthan’s Horticulture Department which involves creation of water harvesting structures, recharging ground water, pumping with solar pumps and irrigating through drip.

Some farmers' income levels increased four-fold and even young MBA graduates were inspired to take up farming. SSAEL is offering an innovative cloud-based platform that tracks the performance of Solar Pumps and remote Solar PV Plants through data loggers and GSM-SMS technology.

The award envisages setting up pilot demonstration projects in Rajasthan and Chattisgarh for 400 solar pumps and 100 solar PV plants on a single platform that tracks both solar pumps and off-grid power plants. This mechanism of monitoring crop cultivation, yields and ground water levels alongside power generation holds the potential to radically improve agri-livelihoods and local economy.

GIS and visualization on maps is planned along with supporting linkage to Aadhar Card and Soil Health Card for a strongly-knit program management during scale up.Mr DV Satya Kumar, Managing Director Shri Shakti Alternative Energy Ltd, said “The system will record measurement of current and voltage from the solar array and will report the kWh generated, percent solar utilization, water flow and operational status. Such real-time performance monitoring was earlier viable only for large megawatt solar plants and to bring that to pumps and off-grid plants will dramatically improve the service levels and scale up of the program.”

Dr. Dinesh Kumar Goyal, IAS (Retd), former Additional Chief Secretary, Govt. of Rajasthan, and architect of the Rajasthan Solar Water Pumping Program, is the Team Leader of this project. Speaking on the occasion, Dr Goyal said “The system obtains feedback from farmers on the service quality through SMS soon after a service call. Instant report generation is possible state wise, district wise or manufacturer wise, in the form of charts and customizable reports.”

Shri Shakti Alternative Energy Ltd (SSAEL) http://www.ssael.co.in, was incubated by IFC, Washington, under the PVMTI program. The company has developed a 100MW Solar Park under a MoU with the Rajasthan Government and one of India’s largest private sector utilities is developing 50MW project in the park. SSAEL has executed projects for World Bank, ADB, UNIDO, UNICEF, kfW, IREDA and RERC and has partnered with Alectris, a Global Leader in Solar O&M, to offer ACTIS, the world’s first ‘Solar ERP’ software for integrated O&M, performance monitoring and asset management for utility scale projects in India.