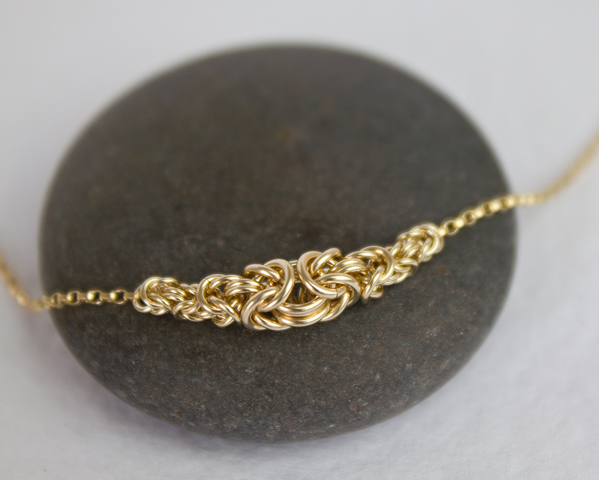 Simple Gold Byzantine Necklace from Femailler, as worn on The Young & The Restless

Deborah Wilson Taylor’s Simple Gold Byzantine Necklace was worn on The Young & The Restless; as she advances in JTV 2015 Rock Star Designer Competition.

Online PR News – 15-May-2015 – Austin, Texas – Austin, Texas jewelry designer Deborah Wilson Taylor (http://www.femailler.com) has had her jewelry worn by Kelly Sullivan (as Sage Warner) on CBS’s The Young & The Restless, episodes 10656 and 10657, which aired April 30 and May 1, 2015. Concurrently, Deborah’s company Femailler has advanced in the JTV 2015 Rock Star Designer Competition, where the top five designers will compete in a reality series for the title of JTV Rock Star Designer.

Deborah’s Simple Gold Byzantine Necklace was presented to the wardrobe team for The Young & The Restless as part of California-based The Artisan Group®’s Stylist Gift Bag Initiative, and subsequently selected for Ms. Sullivan to wear on the show. "I chose this necklace for TV because it is simple but elegant," remarked Deborah. "I knew that because it was shorter in length, it would suit a variety of necklines and that the detail would show up well in close-ups."

The necklace, which is part of the Gold Byzantine Collection, is available to purchase at femailler.com, where it retails for $200.00.

“I knew that because it was shorter in length it would suit a variety of necklines and that the detail would show up well in close-ups.”

Taylor’s participation in the JTV Rock Star Designer Competition involved creating and submitting a short video highlighting her work process and current designs, along with a bio and photos. JTV’s panel of experts then chose top designers (including Taylor) to be voted on by the public. Public voting ends May 28 and the top 10 vote-getters will proceed to the next round of competition. After further evaluation, the judges will then choose 5 finalists to travel to Knoxville, TN to compete in challenges until 4 are eliminated and a winner is chosen by the judges.

Femailler is the home of exquisitely handwoven, eco-friendly, responsibly made jewelry with a high level of craftsmanship and attention to detail. Deborah, who calls herself a solopreneur, creates every piece of jewelry herself and handles all aspects of the business, including website, photography, videography, social media, order fulfillment and customer service.

She says, "My passion is taking an ancient form of jewelry, chainmaille, and bringing it to the modern, high-end market." Popular designs include crosses (a Femailler original design) from the Faith Collection and long and short drop earrings, which customers favor because they go with everything and can 'up' a look no matter what they’re wearing or where they’re going.

The designer began creating chainmaille at the age of 14, after being taught by her brother. She quickly decided to take those skills and create smaller more intricate versions in quality materials, in the form of jewelry. She finds herself inspired by taking note of the different textures that chainmaille weaves create and then identifying shapes “out in the world” that are begging to be transformed by that unique texture.

Taylor’s jewelry is available to purchase on her website, on Etsy (Femailler.etsy.com) and in Design Lab (http://www.designlabaustin.com). She has been mentioned in Austin Fusion Magazine and the blog SelfRescuingPrincessSociety; and was written up in the Austin American-Statesman for a chainmaille dress she created for 2013 Austin Fashion Week.

ABOUT DEBORAH WILSON TAYLOR AND FEMAILLER
An intricate blend of exquisite fine jewelry, eco-conscious quality craftsmanship, and the old world charm of chainmaille, peppered with southern hospitality and a passion to create exclusive designs that are as beautiful as the people wearing them.
Femailler is owned by artisan jeweler Deborah Wilson Taylor, and based in Austin, Texas.