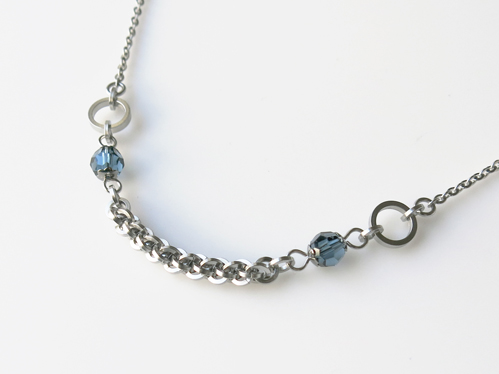 Alyce n Maille has had its Blue Twist Chainmaille Necklace worn by Carrie Madsen on Episode 22 of Jane the Virgin. The episode aired May 11 on the CW Network.

Alyce n Maille founder/designer Jennifer Nyiri presented the handcrafted necklace to the show’s wardrobe team as part of a collaborative Stylist Gift Bag from California-based The Artisan Group®. “Seeing my piece on the show was a total surprise,” remarked Jennifer. “I am a huge fan, so I’m glad I was tuned in to see it being worn!”

The eye-catching stainless steel and blue crystal necklace is an Alyce n Maille original design. As with all Alyce n Maille Jewelry, it was handcrafted by Jennifer. The necklace is versatile and adds style to any look; making it the perfect every day essential. “I see this necklace as a unique accessory that is practical yet stylish,” said Jennifer. “I thought it would be a great choice for any one of the girls on Jane.”

The Blue Twist Chainmaille Necklace is available to custom order at alycenmaille.com.

Its Blue Frost Crystal Pendant will be worn by Nina Dobrev (as Elena Gilbert) in the season finale of The Vampire Diaries, airing May 11, 2015. A pair of Pink Crystal & Pearl Keepsake Earrings were worn by Candice Accola (as Caroline Forbes) on Season 5, Episode 21 of The Vampire Diaries, “Promised Land,” which aired in May 2014. Other pieces are in the hands Raquel (“Miami Monkey”), Alycia Reiner (“Orange is the New Black”) and Ariel King (2014 Queen of the Universe).

Alyce n Maille jewelry has been included in The Artisan Group gift bags for the 2015 MTV Movie Awards, the 2013 and 2014 Primetime Emmys and 2014 New York Fashion Week. It was also a sponsor at Joyce Giraud’s 2014 Queen of the Universe Pageant. It’s Not About Me TV has described Alyce n Maille jewelry as “beautiful,” while the Los Angeles Informer calls it “stunning.”

Jennifer is a mother of three mom-preneur who manages all aspects of Alyce n Maille, including design, production and bookkeeping. She is committed to offering great customer service and creating personal connections with her customers, which has paid off with a coveted five star customer satisfaction rating on Etsy and smashing product reviews. Said one happy customer, “This was an impulse by and it’s good to know my impulse has good taste.”

Supporting a cause that is close to her heart, Jennifer donates a portion of proceeds from the sale of Alyce n Maille jewelry to Dolly’s Foundation(dollysfoundation.org), during a once-a-year fundraiser. Dolly’s Foundation provides community support for pet owners in need, including financial assistance for spaying/neutering, shots and food.

For more information about The Artisan Group, visit theartisangroup.org.

ABOUT ALYCE N MAILLE
Alyce n Maille (http://http://www.alycenmaille.com) is a collection of artisan-made chainmaille jewelry and accessories with a hint of old world charm. Each piece is handcrafted by designer Jennifer Nyiri using the highest quality materials.
Alyce n Maille is a member of The Artisan Group®. The company’s jewelry is routinely considered for use by top television stylists for actresses featured in primetime television shows and has been worn on The Vampire Diaries. Alyce n Maille jewelry has been gifted at GBK’s Luxury Gift Lounges for the Primetime Emmy Awards, the MTV Movie Awards and New York Fashion Week. The company was a product sponsor at Joyce Giruad’s 2014 Queen of the Universe Pageant.

During a once-a-year fundraiser, Jennifer donates a portion of the proceeds from each sale to Dolly’s Foundation (http://www.dollysfoundation.org). Dolly’s Foundation provides community support for pet owners in need, including financial assistance for spaying/neutering, shots and food.