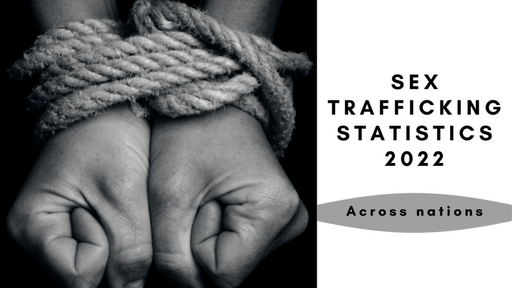 Online PR News – 10-February-2022 – Aarhus, Denmark – Lean back and prepare for interesting sex trafficking statistics that illustrates the current state of this environment

1) 35 million is every single day victims of sex trafficking
Estimates show that, internationally, only about .04% of survivors of trafficking cases are identified, meaning that the majority of cases go undetected.

2) The “industry” has never been larger – It has an estimated 99 billion $ market value
To put it into perspective the sex trafficking industry is larger than the global cocaine market and almost as big as the global PC market. Also if the yearly revenue of McDonald’s, Netflix, Wall Disney, and Best Buy is aggregated the same value appears.

3) During the pandemic, online recruitment increased 22%
The analysis found significant growth in the proportion of potential victims for whom Facebook (120% increase) and Instagram (95% increase) were the sites for recruitment.

4) There have never been so many child victims
Worldwide, almost 20% of all victims are children. However, in some parts of Africa and the Mekong region, children are the majority (up to 100%).

5) Why people end up in sex trafficking; Recent migration, Mental Health issues, Unstable housing, Homeless Youth, and Drug abuse
Everyone ending up in a trafficking situation has a clear and identifiable vulnerability that a trafficker preyed upon.

“Trafficking in Texas has e.g. risen during the COVID-19 pandemic. That’s because economic problems caused by the pandemic have made the problem of human trafficking worse”

- Data/information was collected from 172 countries with 109.216 identified victims.

- Estimating the full overview of trafficking is challenging since victims so often go undetected, something the United Nations refers to as “the hidden figure of crime”.

- To support the findings of this report, external sources have been used as a peer review tool.

- Sex trafficking is defined as “the range of activities involved when a trafficker uses force, fraud, or coercion to compel another person to engage in a commercial sex act”.

- It has been easier to gather data on certain regions/countries than others (which therefore can result in a minor distortion of the real picture).

Why is this report useful?

The average annual profit for every woman in sex trafficking is 100.000$. The average for both genders is 21.800$. Further, the report reveals that sexual exploitation can yield a return on investment ranging from 100% to 1,000%. In the Netherlands, investigators were able to calculate the profit generated by two sex traffickers from a number of victims. One trafficker earned $18,148 per month from four victims (for a total of $127,036) while the second trafficker earned $295,786 in the 14 months that three women were sexually exploited.

There is a huge difference between the estimated number of victims and the actually identified victims. The identified victims are the cases that go to the police and often in court. But Bedbible.com knows from research that the majority do not end there. It’s under 5% that is prosecuted.

That being said the identified victims statistics give a good idea about the development. So as it can be seen the cases are increasing significantly, and so are the earnings. Since 2014 Bedbible.com has seen a 60% increase in identified victims.