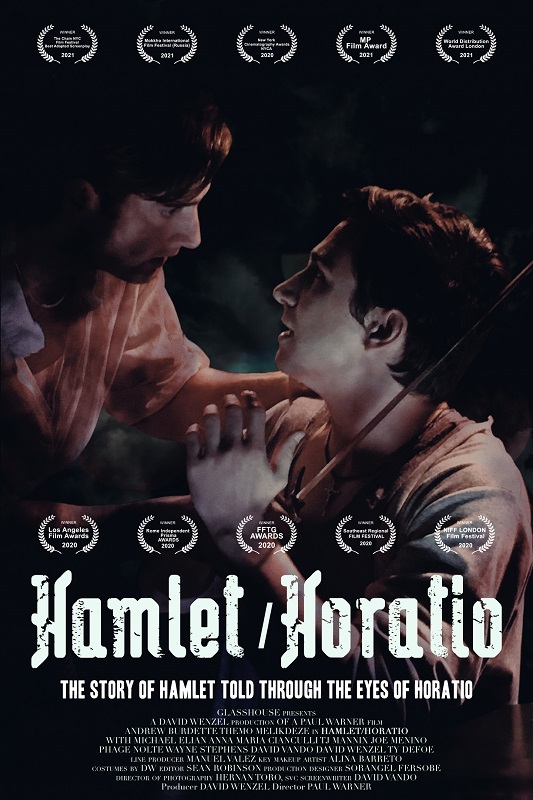 VIEW THE FILM FOR FREE ON Tubi NOW: https://tubitv.com/movies/606874/hamlet-horatio?start=true

A prolific cast and crew rewrite the story of Hamlet from the perspective of Horatio, Hamlet’s most trusted friend, who vowed to keep Hamlet's spirit alive after death.

Many people are familiar with the story of Hamlet and his plot to avenge his murdered father. “Hamlet/Horatio” is a re-imagining of this classic tale. A twenty year collaboration, Hamlet/Horatio is “creativity at its finest”, “remarkable”, “unique”, “gorgeous cinematography” according to press across the nation and beyond.

Since its release, Hamlet/Horatio has garnered ten awards on the independent film circuit, including NY Cinematography, NIFF London, Rome Independent, Los Angeles Film to name but a few!

"A retelling of the classic Shakespeare tale, HAMLET/HORATIO celebrates the power of love to transcend corruption and evil driven by Horatio's mission to keep Hamlet's spirit alive, even after death," said David Wenzel, producer. "We worked on the script to make it relatable to all audiences, so you don't need to have a Shakespearean background to understand the film."

Hamlet/Horatio is suitable for everyone. While audiences find it challenging to understand Elizabethan English, Vando carefully crafted the text to make it understandable for today’s audiences.

The performance skills of the actors add character, spectacle, and style to the plot making it more engaging for the audience. Producer David Wenzel is a longtime fan of Shakespeare and is committed to helping to keep the work of the writer alive. Hamlet/Horatio is an excellent educational tool for teachers across the globe, allowing a fresh look at Hamlet in an accessible and exciting way for students young and old.