Jeff Julia, Founder of Koncept Garage, working with his team.

Major League Rugby complex receives a makeover to deliver the Austin Gilgronis a competitive advantage ahead of the playoff push.

Online PR News – 25-June-2021 – Austin, TX – The Austin Gilgronis, (also known as AG Rugby) have aligned with Koncept Garage to deliver a unique competitive advantage for both players and staff ahead of the Major League Rugby playoff push. On Wednesday, May 5th, the Koncept Garage team of professional organizers descended on AG Headquarters for a massive cleanout to boost productivity and performance. In less than 24 hours, they finished the job.

In early April, senior management met in search of creative solutions to optimize efficiency within the facility. “Performance is what we’re graded on, and every competitive edge is a win for us,” says Mike Sheehan, AG Rugby General Manager.

They didn’t have to look far. Recognizing the facility could use “a bit of a tidy up,” as Head Coach Sam Harris said, AG Rugby sought out Austin’s leading experts in garage organization, Koncept Garage.

Founder of Koncept Garage, Jeff Julia, visited AG headquarters the same week to meet with several key staff members including AG general manager, medical team personnel, and the coaching staff. AG Head of Performance Simon Thomas says, “The more efficient we are in the gym, the better our performance is on the pitch. Jeff and his Koncept Garage team happily tailored their approach throughout the process and that’s what really worked for our space.”

“We’re always hunting for competitive advantages... Koncept Garage delivered one for us.”

Just like the players who leave it all on the field, Koncept Garage optimizes the spaces they organize. “We do that through our ten design principles,” explained Jeff. With the information he gathered, an ambitious plan was set in motion - a 1-day cleanout to overhaul the eight most problematic rooms inside the AG complex. “By the end of the day, the whole team will be able to find everything in under 30 seconds.”

Wednesday, May 5th arrived and the Koncept Garage team completed their morning huddle and kicked off the cleanout. “Optimizing the facility to support training, recovery and refueling was our main focus. But our style of professional organizing produces results for everyone, including the fan base,” adds Jeff.

It’s true. With the improved workflows in the Merchandise Room, new orders are processed and shipped faster making it easier than ever to support your AGs.
As an added bonus, the Koncept Garage team found ways to incorporate the AG Rugby culture into the project.

“The camaraderie here is what makes AG Rugby so special. They [Koncept Garage] did a great job understanding that and building it into the job,” says Mike Ablett, AG Rugby’s Chief Marketing Officer.

“One of our design principles is ‘emphasis’. With this custom panel system, anybody who walks into that gym knows exactly what they are working toward,” says Jeff. With productivity and performance now dialed in at AG Headquarters, there is an extra buzz of excitement as they start the second half of the season.

Two weeks after the cleanout, the AG production team was wondering where the ping pong balls had gone. To test Jeff on his bold promise, they sent him this text:

“Looking for the ping pong balls, any ideas where they might be?”

Koncept Garage is a proud partner of AG Rugby and their professional organizer of choice. To learn more, head over to http://www.konceptgarage.com 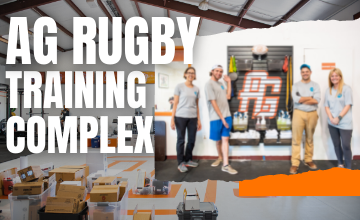