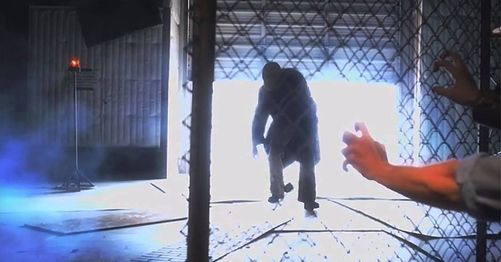 The Hunchback entering the caged arena.

A psychological, who-done-it thriller movie that teaches bullies to think twice before physically or mentally abusing another person.

Bullies might want to watch the movie that will send shivers down their spine. The long-awaited improv and ad-libbed psychological thriller “The Hunchback of Bel Air” is ready to hit the screens.  This quirky anti—Bullying movie with a masked antagonist is one of the first international horror movies to address the bullying issue which has dominated national headlines over the last two decades. Years back, the trailer alone had moviegoers waiting and distributors calling. The Hunchback of Bel Air is produced and directed by Steve Roeder. Great Art Studios of Los Angeles is in charge of sales, licensing and distribution.

Roeder has experience producing movies and acquiring life rights that provoke controversy. Starting with his executive produced hit TV movie on the Lifetime TV Network,  “Lies My Mother Told Me,” starring Joely Richardson, Hayden Panettiere and Colm Feore, it was then one of the highest ranking films of the network. He also was a Production Executive on NEO NED featuring Gabrielle Union & Jeremy Renner. The Hunchback of Bel Air movie actually inspired the C.A.B. “Celebrity Against Bullies” campaign.

At first glance at the trailer, one might assume the horror film endorses killing and bullying like other scary movies but when the completed film is viewed in context, it clearly does not. The movie makes the point that for every action there is a reaction.

“We must take bullying seriously or continue to face the consequences it may bring; some of which we are seeing all too often in our news headlines. The movie is about bringing awareness to the bullying issue, no different than a movie about the end of the world that aims to increase awareness of viruses or global warming.  Sometimes it takes a dramatic approach to wake people up. All efforts of the past have not stopped this worldwide problem. Hopefully it's not too late,” states Roeder.

The Hunchback of Bel Air is aligned with a few amazing seasoned actors from hit TV shows & film. The cast list includes Doug Tait, who plays the Hunchback and whose credits include 7th Heaven, The Young & The Restless, NCIS Los Angeles, Heroes, Bones & Sons of Anarchy.  Trevor Coppola of Beverly Hills 91210, Boston Public & Party of Five. Also starring is Teddy Lane Jr. of Rules of Engagement, CSI, House M.D., The Shield, Ghost Whisperer, Boston Public & The West Wing. The movie is Co-produced by Ron McCoy who acted in several award winning films as “Wag The Dog” alongside, Robert Dinero and Dustin Hoffman rounds out the SAG actors. Walk ons and inexperienced actors perform admirably with creative and inspiring direction from Roeder.

All proceeds from The Hunchback of Bel Air website shop will be donated to a reputable anti- bullying organization to be announced.