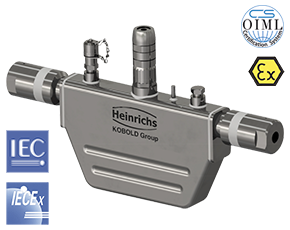 Online PR News – 08-April-2021 – Malaysia, Singapore, Brunei, Cambodia, Philippines – On the road to climate-friendlier mobility, Hydrogen is gaining importance as an energy source for fuel cells. However, fueling of hydrogen is more complex than fueling of gasoline and diesel. Unlike other gases, hydrogen heats up as it expands, causing Pressure and temperature changes during fuelling that need to be precisely monitored. Therefore, Heinrichs Messtechnik GmbH has developed the TMU-W 004 mass Flow meter, which ensures precise metering despite pressure and temperature fluctuations. The device is the first of its kind certified to international standard OIML R 139 2018 and thus approved for hydrogen filling stations. A robust, slender housing protects specially arranged sensors and measuring loops that use the Coriolis effect and enable very precise flow measurement. The attached transducer converts the sensor signals into a reading that can be used to further analyse the flow rate. At the same time the meter measures the temperature of the medium. The TMU-W 004 is suitable for high-pressure applications up to 1000 bar. This newly developed device is already in use at filling stations of the listed company Nel Hydrogen.

Hydrogen as a fuel is gaining ground in Germany, in part due to the stimulus packages passed by the government. Currently Germany has the most public hydrogen filling stations in Europe, according to Statista. Worldwide, Germany is in second place after Japan. “For passenger cars, fueling the hydrogen is typically done at 700 bar. This high pressure is necessary to generate the energy density needed for useful ranges,” explains Guido Thometzki, CEO of Heinrichs Messtechnik GmbH. “During this process the temperature must not exceed +85 °C, since otherwise the tank lining can be compromised.” Since the tank expands and heats up during filling, the hydrogen is cooled before it gets to the tank. This high-pressure environment combined with the small size of the hydrogen molecule makes special demands on the accuracy of flow monitoring.

Therefore, Heinrichs Messtechnik GmbH optimized its proven Coriolis Mass Flow Meter for such high-pressure applications, and now offers the TMU-W 004, a version of the new TMU-W series specially designed for handling hydrogen. The meter ensures that during filling, the amount of hydrogen transferred to the vehicle tank is measured accurately. This enables correct billing of the amount filled, which is a prerequisite for fuelling at public hydrogen filling stations. It covers a measurement range of 0.133 kg/min H2 to 4 kg/min H2. Thanks to structure and fluid simulations performed during the development phase, it was possible to achieve the optimum arrangement and dimensions of all the mechanical and electromechanical components. As a result, the device is the world’s first and thus far the only flow meter to obtain certification to international standard OIML R 139 2018, which covers measurement systems for compressed gaseous fuels in vehicles. The listed Norwegian company Nel Hydrogen is already using the TMU-W 004 successfully at its filling stations.

For the meter to fit into Nel’s narrow fuel dispensers, it was designed substantially narrower than its predecessor models. Inside the compact and deformation-resistant housing are two U-shaped measuring tubes arranged in parallel. „An exciter system causes the measuring tubes to vibrate at their natural frequency. As the medium flows through these tubes, the Coriolis effect causes additional phase-shifted deviations of the tubes,” explains Thometzki. “Sensors positioned at the optimum points on the measuring tubes pick up these phase-shifted deviations and send them as signals to the transducer (also called the transmitter) for further analysis. From them, the current mass flow is calculated.” The special device architecture – that is, the shape of the measuring tubes and the ideal positioning of the sensors on the tubes – along with the further harmonizing of the other components such as the gusset plates, make this a particularly sensitive and accurate meter, despite the thick walls of the measuring tubes. This robustness on the part of the measuring tubes is necessary in order to withstand the high 1000 bar pressure (the test pressure is actually 1500 bar). The tough, fully welded housing with corrugations for added stiffness gives ample protection for the sensitive measurement equipment within.

The flow amount can be evaluated using the pulse or status output of the transducer. „The user also gets information on the temperature of the flow, and optionally the density as well. This can be used to control the compressor pumping the hydrogen, for example switching to a higher volume or conversely interrupting pumping,” adds Thometzki. The transducer has a two-line LCD display that shows the values directly. The unit is easy to configure using the four keys provided on it. Among other functions, the user can define outputs and do fault analysis with the keys. The transducer can be set up as a round version or installed in a switchgear cabinet as a rack version. Both the TMU-W 004 housing and the field housing of the transducer are pressure-resistant and intrinsically safe, which helps prevent fire or explosion in case gas escapes.

In the development, manufacture and calibration of its meters, Heinrichs Messtechnik GmbH makes use of many simulation and optimization methods to ensure the precision and reliability of its devices under all conceivable conditions. “Devices for handling high-pressure gases like hydrogen, such as the new TMU-W 004 for hydrogen filling stations, naturally cannot be an exception,” explains Thometzki. “On the contrary, in the development of the TMU-W 004 in particular we used specially developed high-precision simulation methods for the flow and structural design, like FEM (finite element method), CFD (computational fluid dynamics), and FSI (fluid structure interaction).” Only in this way was it possible in the TMU-W 004 to meet the seemingly contradictory requirements of the highest measurement precision and extreme reliability in handling high-pressure gases. The measurement precision also had to remain high despite pressure and temperature fluctuations during filling. “The fact that the TMU-W 004 not only meets the requirements of OIML R 139 2018, but significantly exceeds them with its precision class rating of 1.5 for hydrogen, shows, especially in international comparison, how much the TMU-W 004 development team has accomplished,” says Dr Thomas Chatzikonstantinou, technical director at Heinrichs Messtechnik GmbH in conclusion.

For over a hundred years, Heinrichs Messtechnik GmbH, founded in 1911 in Düsseldorf, has developed and sold flow meters. From the beginning, one of its core markets was the chemical and petrochemical industry, and so since the '60s the company has pushed the development of all-metal float-type flow meters. In the mid-1980s, Heinrichs was the first European company to build a mass flow meter using the Coriolis effect, and in the years that followed steadily expanded its Coriolis instrument line. Today the company has customers in many industries, including chemicals oil/gas, energy, and plant and mechanical engineering. In 2008, Heinrichs became part of the Kobold Group, giving it an extensive sales network thanks to the Group’s international subsidiaries. Heinrichs develops and manufactures all of its products in-house at its headquarters in Cologne, which currently employs 60 people.