Central Taxis in Harrogate launch a new mobile friendly website for the ever increasing number of smartphone users.

Online PR News – 26-March-2021 – Harrogate, North Yorkshire – Central Taxis owner, Kevin O'Boyle has lived and breathed being a taxi driver and business owner since he first started in the trade 56 years ago.

"In the early days it was much easier to make a good living but now it’s become much more competitive and taxi firms need to have an edge and keep up-to-date with new technology," Kevin said.

Kevin decided that it was time to get a new website that was more user friendly for the growing number of mobile phone users and one that would be a good marketing tool for his business.

Harrogate web designer, Nicholson Digital were commissioned to build the new website – centralradiocars.co.uk – which has just recently launched. The new, up-to-date website allows customers to easily book a taxi with a simple click to call function or they can get a quote by simply filling in a form.

"I'm really pleased with the new website as it's so quick and easy to use and works seamlessly on any device," Kevin said.

Kevin added: "I've also made sure our cars are up-to-date by fitting them with the latest sat-nav as well as a live flight tracking system for airport transfers."

Kevin has held a taxi licence since 1965, longer than any other driver in the Harrogate District. And moreover, he's driven approximately 3 million miles.

With staff of over 70 at one time, Central Taxis Harrogate recently relocated from Kings Road in Harrogate to Claro Road and condensed its business to 20 vehicles. 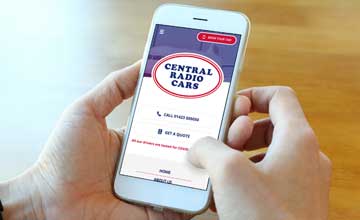