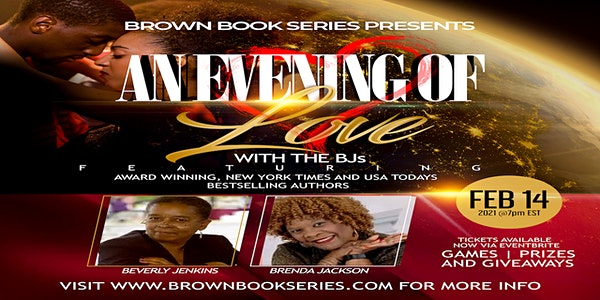 Online PR News – 03-February-2021 – Boston, MA – Shay Baby, host of the popular Talk Show Brown Book Series: A Novel Experience (available on YouTube) thrilled to announce a unique opportunity for Romance fans around the world An Evening of Love with the BJs which will air live on February 14, 2021. Featuring Awarding- winning authors Beverly Jenkins and Brenda Jackson. It is a free event, Tickets are available on Eventbrite.

The Brown Book series started 2020 off with an outstanding Interview of Beverly Jenkins. The recipient of the 2017 Romance Writers of America’s Nora Roberts Lifetime Achievement Award, and the 2016 Romantic Times Reviewers’ Choice Award for historical romance. Nominated for the NAACP Image Award in Literature and featured both in the documentary “Love Between the Covers” and on CBS Sunday Morning. Her wit and charisma bring an added something to the Brown Book Series interviews that you just won’t want to miss.

Combine with Brenda Jackson trailing blazing contribution to the industry, such as being the first African-American author to have a book published under the Harlequin/Silhouette Desire line of books and the first African-American romance author to make USA Today’s Bestseller’s List and the New York Times Bestseller’s List for the series romance genre. Brenda received the Romance Writers of America’s Nora Roberts Lifetime achievement and Pioneer Award in Writing from Romantic Times Magazine. This interview is a must see for any romance fan.

The interview will feature both authors live on valentines day with enough love and laughter to fill an entire evening. The first 10 ticket holders receive a FREE BOOK of their choice written by either Beverly Jenkins or Brenda Jackson. Also, you can subscribe to http://www.brownbookseries.com for a chance to win a Brown Book Series Swag Bag Gift Box or a FREE KINDLE.

Brown Book Series name pays homage to Mills & Boon, the first publishers to put a brown cover on romance novels so fans could read and enjoy them in public without scrutiny. Shay hosts a show where Romance fans can have fun and enjoy without judgement. Follow on Facebook, Instagram and Twitter @ Brown Book Series.

Authors Discuss The Harder Parts Of Being An Author

The Author Encounter Launches New Online Series 'Behind The P ...
visit our website 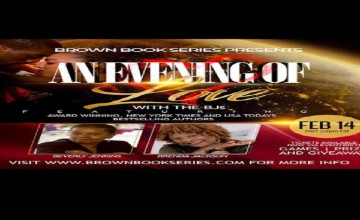