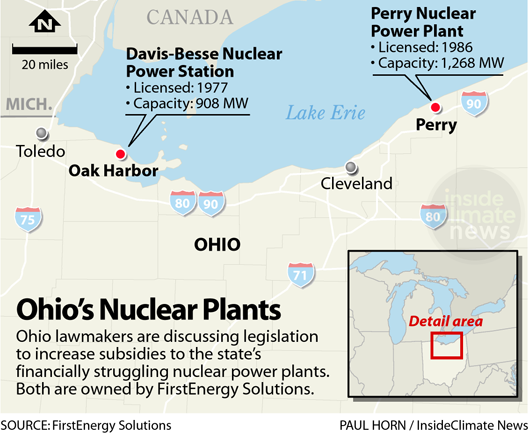 Entities acting on behalf of Energy Harbor and the international law firm of Akin Gump Straus Hauer & Feld have asked a federal bankruptcy court for a delay.

The affidavits were scheduled to be filed with the court on Jan. 8 2021 in In re: Pleasants Corp. Case No. 18-59763. They were demanded of Akin Gump lobbyists Sean D’Arcy, Henry Terhune, James Tucker and Geoffrey Verhoff, who billed $2.8 million in Ohio state lobbying fees to forward the passage of Ohio H.B. 6. That bill gave approximately $1.4 billion in subsidies to First Energy Solutions, an operator of two nuclear power plants in Ohio that were said to be losing money without offering proof.

In the "emergency" request, Akin Gump argued that it had already prepared the affidavits and would be able to file them on time in the court so ruled.

Judge Koschik has ordered that a hearing be held on the “emergency” request via telephonic hearing on Jan. 19 at 10 a.m.

Four Ohio-based lobbyists for H.B. 6 were indicted on racketeering charges in a $61 bribery scheme designed to aid the bill’s passage. Also indicted in the scheme – allegedly Ohio’s largest governmental bribery ever – was Ohio’s then-Speaker of the House, Larry Householder, a Republican.

The request for affidavits arose because, according to court documents, Akin Gump employees were involved on almost a daily basis in consulting with the accused racketeers.

“These Wall Street vulture funds dealt out some of the nation’s most dangerous nuclear facilities as if they were poker chips believes Jeff Barge CEO of Lucky Star Communications an Ohio communications firm.”

According to court records, it was in fact a check from Akin Gump that served as the initial retainer to one of the racketeers who has pled guilty, Juan Cespedes of the Oxley Group.

The Ohio Consumers’ Counsel, a state agency charged with guarding the interests of the state’s energy consumers, filed an objection to the delay, stating that no valid reason for it had been given.

Some of the specific questions asked of the Akin Gump lobbyists, some of whom were attorneys, were as follows

a. Describe your role in the 2018 and 2019 contests for the speakership of the Ohio House of Representatives. (All.)

b. Describe your role in the 2018 general elections for the Ohio legislature. (All.)

c. Describe nature of your interactions and relationship with Juan Cespedes and the Oxley Group. (All.)

According to court documents, the interrogatories above became necessary because U.S. Attorney for the Southern District of Ohio David DeVillers refused on numerous occasions to provide relevant information to Judge Koschik on whether these potentially racketeering-related fees should be paid.

FirstEnergy, the parent company of bankrupt FirstEnergy Solutions, is currently being investigated not only by the U.S. Attorney, but by the Public Utilities Commission of Ohio, the Securities and Exchange Commission, and the Attorney General of the State of of Ohio, David Yost.

According to court records, Yost makes the puzzling claim that the entire bankruptcy claim was part of the fraudulent racketeering scheme. He hasn’t explained this in detail, but FirstEnergy Solutions, now renamed Energy Harbor, initially received a bid from Exelon, the nation’s largest generator of electricity from nuclear power, to buy them out of bankruptcy.

This offer was rejected, and FirstEnergy Solutions/Energy Harbor bonds fell into the hands of a number of Wall Street Vulture firms, which bought bonds for as low as .30 cents on the dollar and later converted the bonds into stock in the post bankruptcy firm, gaining operating control.

In a surprise move made immediately upon leaving bankruptcy, the firm was drained of $800 million in operating funds, which went to buy out one set of Wall Street vultures for a huge cash profit.

Currently, Nuveen Corp. (a financial firm owned by TIAA) and Avenue Capital own virtually all of the company, owning 45% and 16% respectively.

Energy Harbor faces $10 billion in eventual clean-up costs, but only has $2 billion in its clean-up trust fund.

“These Wall Street vulture funds dealt out some of the nation’s most dangerous nuclear facilities as if they were poker chips,” believes Jeff Barge, CEO of Lucky Star Communications, an Ohio communications firm. “It was a high-stakes game of financial poker, and the financial vultures of Wall Street won."