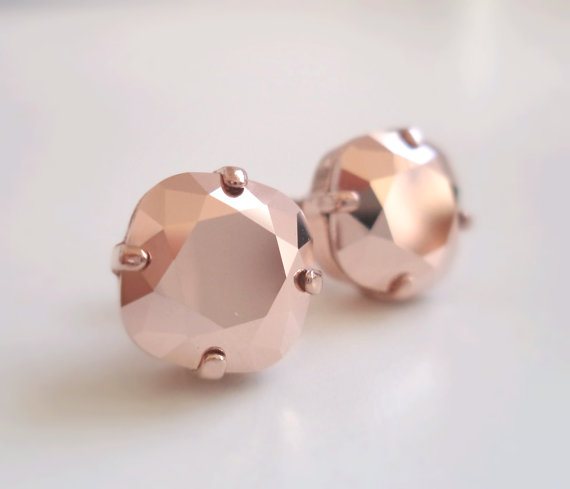 The California-based, handcrafted jewelry company’s Ornate Dangle Earrings were recently worn by Crickett (Brandi Burkhardt) on The CW Network's Hart of Dixie, Episode 316, "Carrying Your Love With Me." Its Rose Gold Crystal Studs will be included in The Artisan Group® Press Bags at GBK’s Luxury Gift Lounge in Honor of the 2014 MTV Movie Awards Nominees & Presenters, taking place April 11-12, 2014 at an exclusive location in Beverly Hills, California.

The rose gold dangle earrings worn by Crickett on Hart of Dixie were designed and handcrafted by LoveYourBling owner Ruthie Youngman exclusively for the show and were part of a Stylist Gift Bag presented by The Artisan Group to the show’s wardrobe stylist Meredith Markworth Pollack, who selected them for use. The earrings feature ornate rose gold connectors with rose peach Swarovski crystal tear drops and measure 2 inches long.

“I envisioned earrings that would play well with the light, feminine outfits that characters like Lemon and Crickett wear on the show,” noted Ruthie. “Their wardrobe styling has a vintage yet contemporary feel that I wanted to complement. The finalized design melds the soft pink in the rose gold with the sparkly qualities of the rose peach crystals to create earrings that offer vintage style with a modern twist.”

For the MTV Movie Awards press gifting, Ruthie designed a rocker chic stud earring in rose gold. Notes Ruthie, “The larger faceted stone stud with matching monochromatic post settings is simple yet eye-catching. The rose gold is versatile and of-the-moment. I expect these will become a 'go to' earring for many.”

Jewelry designer Ruthie Youngman, founder of LoveYourBling, is a sunny ‘California Girl’, wife and mom. She has translated her passion for collecting vintage teacups, out-of-production Swarovski crystal beads and Japanese miniature toys into creating eye-catching and often whimsical jewelry that cleverly incorporates these elements and is also perfectly suited to weddings and every day special occasions.

Ruthie loves color and takes a playful approach to fashion and accessorizing. Like her collectors, she enjoys versatile jewelry that is easy, classic and feminine.

Ruthie, who is also a Licensed Clinical Social Worker, began her artisan career hand-painting Dr. Scholl’s sandals as LoveYourSoles, on Etsy. In the process of searching out sandal bling, she discovered a treasure trove of sparkly beads and crystals that inspired her to fashion a few jewelry designs. Her initial forays into selling her creations involved taking on custom orders for friends, one of which resulted in what is now her signature design, the Alice in Wonderland Tea Cup necklace. When she listed a similar teacup necklace on Etsy and it sold within two days, LoveYourBling took flight.

LoveYourBling is a Swarovski Crystal Elements Branding Partner and a member of the by-invitation-only, juried celebrity gifting organization The Artisan Group®.

The company has gifted jewelry to Selena Gomez and the wardrobe stylists at “The Voice,” “The Vampire Diaries” and “Hart of Dixie.” It has also as participated in elite award show gift lounges such as GBK’s Luxury Celebrity Gift Lounge in Honor of the 2014 Golden Globes Nominees & Presenters. LoveYourBling has been featured on Etsy’s popular blog, TheStorque. Its Alice in Wonderland Tea Cup Necklace has made the front page of Etsy and its Miniature China Plate (no longer available) was selected as an Etsy’s Find.