To help consumers be better educated on the lemon law, MyLemon.com has assembled a mini-guide to 4 common misunderstandings about the lemon law that consumers should know about.

The lemon law is designed to protect people when they purchase a vehicle, but consumers who do not know what lemon law says cannot properly protect themselves. Below are four commonly held misunderstandings about the lemon law and explanations on each.

Misunderstanding #1 – There is a Single, Nationwide Lemon Law.
Actually each state has its own state lemon law and more than one in some states. Although state laws tend to be quite similar, they differ enough that car owners should know what their state law says.

Misunderstanding #3 – Any and All Vehicle Defects are Covered By Lemon Laws.
Some people think that any vehicle defect is covered under a state’s lemon laws, at times people even think that something like replacing the windshield wipers would be covered. However, the law only applies when the problem is substantial and seriously impairs the value or use of the vehicle. There are also requirements regarding how many times the car has to be taken in to be fixed, how long it takes to be repaired, and other details in order to qualify for a claim.

Misunderstanding #4 – All Vehicles are Covered By the Lemon Law.
Many people believe that all types of vehicles are covered by their state’s lemon law. Although in some states a number of different vehicles are covered; most states have specific, and often limited, requirements for what constitutes a lemon. Usually the only vehicles covered by a state’s lemon laws are cars which are for personal use. That means that business cars, motorcycles, and many other vehicles will not be protected in some states. Consumers should be certain to research their state’s classification on vehicles to be sure that they understand their state’s law.

Although there are a number of commonly held misunderstandings regarding lemon laws, the laws do exist to protect consumers. Car owners should understand the law to a point, and then seek out appropriate legal help to take care of the remainder of the process. Any good lemon lawyer won’t even charge fees for their representation and instead will work to have the manufacture not only remedy the car situation, but also pay their fees too!

Are Used Cars Covered Under The Pennsylvania Lemon Law? 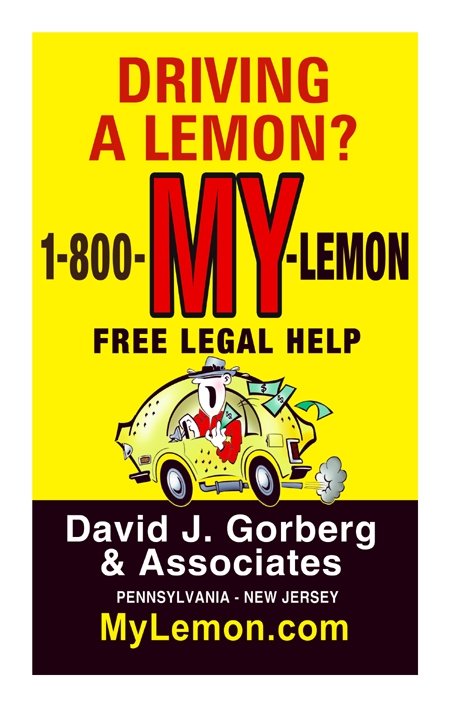 David J. Gorberg Nominated for Cambridge Who's Who Directory