Online PR News – 25-March-2014 – Chicago, Il - March 24, 2014 – Like the recently published study sponsored by Nasa's Goddard Space Flight Center, Geraldine Perry's new book Climate Change, Land Use and Monetary Policy: The New Trifecta utilizes historical examples to illustrate that civilization's “process of rise-and-collapse is actually a recurrent cycle found throughout history.” Similar to what was uncovered by the Nasa study, Perry argues that the multiple, seemingly unrelated crises now facing us, including growing wealth disparity, all stem from land use. In addition, Perry takes a look at the monetary policies which have driven unsustainable forms of land use for millennia and describes how monetary policy might be reformed in such a way as to be both constitutionally faithful and “land friendly.”

Examples of how the current economic system serves to undermine all efforts to heal our planet are sprinkled throughout the book and contrast sharply with the types of social, environmental and economic reforms many agree are necessary if we are to avoid “irreversible global collapse” described by the Nasa study. The first portion of the book focuses on the relationship between climate change and land use, particularly in the agriculture and energy arenas, challenging much of the conventional thinking about global warming and how best to heal our ailing world. Here the reader is introduced to a unique form of agriculture through which it is possible to rebuild the soil, reduce CO2 and associated pollution - and at the same time feed the world's billions many times over with nutrient dense foods. Here the reader also learns about “land friendly” energy alternatives that bear little resemblance to today's so-called “clean” or “green” energy alternatives.

The last portion of the book explores the relationship between land use and monetary policy which the modern world inherited from ancient Mesopotamia. It is the extractive nature of this monetary system which encourages the high risk gambling characteristic of trifecta bets that destroys the land and deprives the people of the fruits of their labor. Land use is the problem and “land friendly” monetary reform is the solution.

About: Geraldine Perry has a Master's Degree in Education and an undergraduate minor in Library science, both of which have served her well in her research and writing. Her subsequent training as a a Certified Natural Health Consultant led to an increased interest in agriculture and the environment, and ultimately to the need for systemic monetary reform. This is her second book. Her first was entitled The Two Faces of Money, co-authored with Ken Fousek. More information for both books can be found at The Two Faces of Money website. 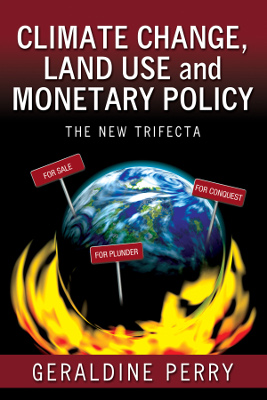 New Book With Original Approach To Climate Change And The Env ...
visit our website