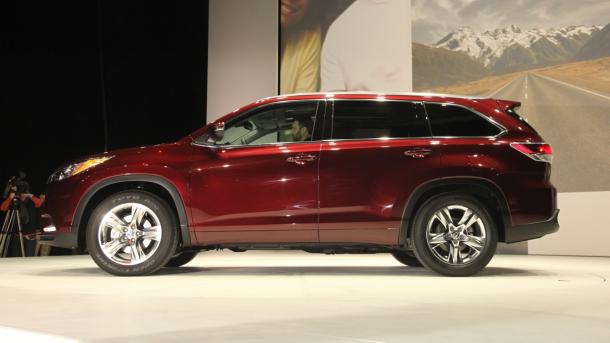 Edmunds says: “The 2014 Toyota Highlander's debut at the 2013 New York Auto Show promises to be an important one for buyers shopping in the crossover segment.”

Toyota of Hollywood is also home to the all-new 2013 RAV4, along with some of the best-selling cars in the United States, including America’s best selling Toyota Camry, the world’s bestselling Toyota Corolla, the eco-friendly Toyota Prius hybrid, and the Tacoma pickup. Well known models 4Runner, FJ Cruiser, Highlander, Land Cruiser, Matrix, Sequoia, Sienna, Venza, and Yaris, are also at the Toyota dealership which serves Ft. Lauderdale.

Toyota of Hollywood provides their South Florida Toyota customers with outstanding sales and service: trade-ins, financing and the best rebates on the largest selection of new and certified pre-owned Toyota cars, SUVs, minivans and trucks.

Conveniently located close by Aventura, Cooper City, Pembroke Pines, and Weston in the Hollywood region of South Florida Toyota of Hollywood has expert sales and service personnel and professional technicians to help their customers in all their Toyota needs. Also serving Miami, this trusted Toyota dealership maintains cars in the best condition and handles all service work with an award winning team of professional technicians and a highly trained parts staff.

For terrific deals on your next Toyota in and around Broward, Miami-Dade, and Palm Beach Counties, call Toyota of Hollywood at (954) 874-2000 or visit ToyotaofHollywood.com for more information.

Serving Miami and Ft. Lauderdale Toyota customers since 1981, Toyota of Hollywood is a South Florida Toyota dealer selling and servicing new and pre-owned vehicles. Toyota of Hollywood cars and trucks include the world’s best-selling and most trusted cars. The company is backed by expert sales and service personnel to assist customers with all of their Toyota vehicle needs. For more information go to http://toyotaofhollywood.com or http://toyotaofhollywood.com/Press-Release.aspx