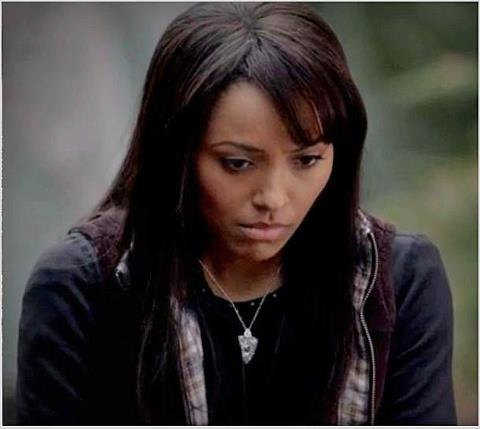 Jakum says Leigh Leverett, the stylist at The Vampire Diaries, notified her last November that the necklace would be worn on the popular supernatural thriller, which airs on CW TV, but did not specify which episode. “I watch the show regularly and have been keeping an eye out,” said Jakum. “Even though I knew the pendant would be used on the show, it was a thrill to actually see Kat Graham wearing it so well.”

As a result of the necklace’s placement on The Vampire Diaries, it will soon be available on the online entertainment shopping site Get★This. Details are forthcoming and can be obtained by contacting Jakum directly.

Leverett received Jakum’s Almandine & Silver Talisman Necklace as part of a stylist gift bag initiative coordinated by art promotions and celebrity gifting company The Artisan Group, of which Jakum is a member. Valerie Guerrero, founder of The Artisan Group, sent the gift bag to Leverett in early November. It included jewelry and accessories from 80 of the Group’s 600+ members. To date, about 20 pieces have been selected by Leverett for use on the show.

"I had Bonnie in mind when I designed this pendant," said Jakum. "I chose the Almandine Garnet because it is intimately tied to the earth and is believed to be a talisman of protection and unyielding strength, both physically and intellectually. Plus it is very dramatic in combination with the silver. This is a great piece of The Vampire Diaries jewelry but also perfect for anyone looking for a striking but versatile pendant."

Although the pendant was specially designed for “The Vampire Diaries,” Jakum is creating similar pendants for her customers and fans of the show. Each pendant is custom made to order and is available on the Metalmorphis website.

At her home studio in Elkhart Lake, Jakum creates her handmade personalized and custom jewelry primarily in Fine Silver Precious Metal Clay. She fashions her necklaces, bracelets, earrings, rings and other accessories using sculptural, metalworking and photo-polymer techniques, as well as carving and bead work. The final step for many of Kim’s pieces is a labor intensive, hand-applied satin finish.

Jakum’s pieces display unique textural elements and often have a surprise element such as a personal message or symbol visible only to the wearer or a complementary motif that allows the piece to be reversible. Jakum is also known for her keepsake / memorial pendant designs that incorporate the drawings, writing and signatures of loved ones.

In addition to designing the Almandine & Silver talisman necklace for “The Vampire Diaries,” Jakum has created jewelry for the cast of The Client List, Mila Kunis, Amy Poehler and Mariska Hargitay. She also participated in the Official 46th Annual CMA Awards. Her work has been recognized in Parent’s Magazine, Metal Clay Today, Metal Clay Artist and Art Jewelry Magazine as well as by http://www.coolmompicks.com and the online marketplace, Uncommon Goods.

Metalmorphis was founded in 2010, but Jakum has been creating and designing jewelry for over 20 years. She teaches out of her home studio, is certified at Level Three for Precious Metal Clay and has studied with well-known jewelry artists Tim McCreight, Terry Kovalcik, Celie Fago and Wanaree Tanner. Her experience and training has paid off with numerous awards over the last several years.

ABOUT METALMORPHIS JEWELRY
Metalmorphis (http://www.metalmorphis.etsy.com) was founded in 2010 and is owned by jewelry designer Kim Jakum of Elkhart Lake, Wisconsin. Jakum creates handcrafted, custom, personalized jewelry using fine silver Precious Metal Clay and other materials. Kim has been designing and creating jewelry for over 20 years and is Level Three PMC Certified. Her work has received numerous awards and has been featured in “Metal Clay Artist Magazine” and at www.coolmompicks.com and www.uncommongoods.com. Jakum is a proud member of The Artisan Group.