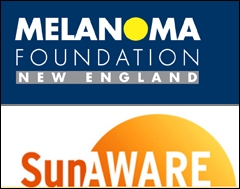 The Melanoma Foundation of New England and SunAWARE will collaborate on new sun protection educational programs for children to combat the epidemic of skin cancer by instilling sun safe habits early.

“The Melanoma Foundation of New England seeks to provide the best and most effective skin cancer prevention and detection advice to its constituencies,” said Deb Girard, executive director. “Giving children the tools they can remember and use to practice safe sun habits is a vitally important effort in slowing the epidemic of skin cancer in this country.”
Girard said that most recent research shows that in 2006 more than 2.1 million Americans were treated for skin cancer, double the number previously thought.

“A collaboration with an organization of the stature of the Melanoma Foundation of New England is a great example of the kind of partnering strategies that can carry the SunAWARE educational message to larger numbers of U.S. children,” said Mary Barrow, executive director. “Although between 40 and 50 percent of Americans who live to 65 will contract skin cancer, it’s almost entirely preventable. Educating children to the dangers of the sun’s ultraviolet radiation (UVR) through a simple and easy-to-remember slogan can be an important step in changing those kids’ futures.”

The five simple steps of SunAWARE are:

Headquartered in Concord, MA, the Melanoma Foundation of New England provides education, support and research for the states of Massachusetts, Maine, Connecticut, New Hampshire, Rhode Island and Vermont. Its most recent program, the very popular “Your Skin Is In” generated more than 6,500 No-Tanning pledges from high schools and colleges and helped focus public attention on the dangers of tanning beds.