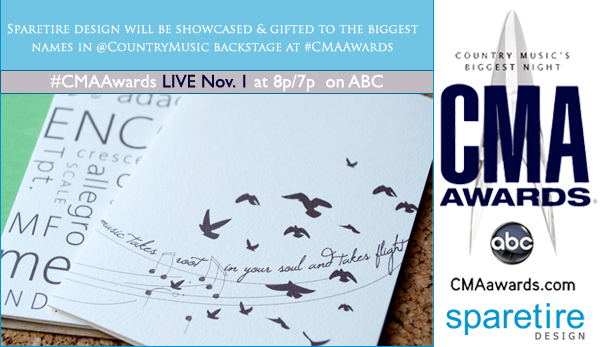 Sparetire Design, in association with The Artisan Group, will be showcased and gifted to the biggest names in Country Music backstage at the CMA Awards on Oct. 29 - Nov. 1, 2012 at the Bridgestone Arena in Nashville, Tennessee. Watch the CMA Awards live Nov. 1 8p on ABC

Online PR News – 23-October-2012 – LONG VALLEY, NJ – Sparetire Design has announced that it will participate in the official celebrity gift lounge in honor of The 46th Annual CMA Awards on October 29 - November 1, 2012 at the Bridgestone Arena in Nashville, Tennessee. Sparetire Design is participating in the annual event in association with The Artisan Group. The Long Valley-based design studio will feature stationery, custom designed for Country Music’s Biggest Night™.

“We are thrilled to be selected to participate in the The 46th Annual CMA Awards and feature our stationery,” said Jessica Gattone, sole proprietor, Sparetire Design. “I thrive on music for my creative process; to have the opportunity to share my work with other artists and musicians that inspire me has made my participation in the event even more thrilling.”

The biggest names in Country Music will receive music inspired, designer Stationery from Sparetire Design backstage at the CMA Awards. This event will also be attended by over 25 media and press outlets.

ABOUT SPARETIRE DESIGN
Sparetire Design is a full service design studio specializing in custom stationery for all of life’s events and for graphic design solutions for small businesses. Founded in 2001, sole proprietor and founder Jessica Gattone works to fully understand each client’s unique needs to create distinctive design solutions. Information and design portfolios can be viewed at www.sparetiredesign.com.

About The Artisan Group
Sparetire Design was selected as a member of The Artisan Group in 2011. The Artisan Group (http://www.theartisangroup.org) is an elite art promotions group representing talented small-business artisans at the best celebrity gift lounges. The organization provides a collective sampling of handcrafted products to celebrities and members of the press at top luxury gift lounges such as those leading up to The Academy Awards, The Golden Globes, The MTV Movie Awards and The Primetime Emmys. Membership in The Artisan Group is juried and by invitation-only. The Artisan Group also offers its members guidance in the areas of sales, marketing, social media and public relations.