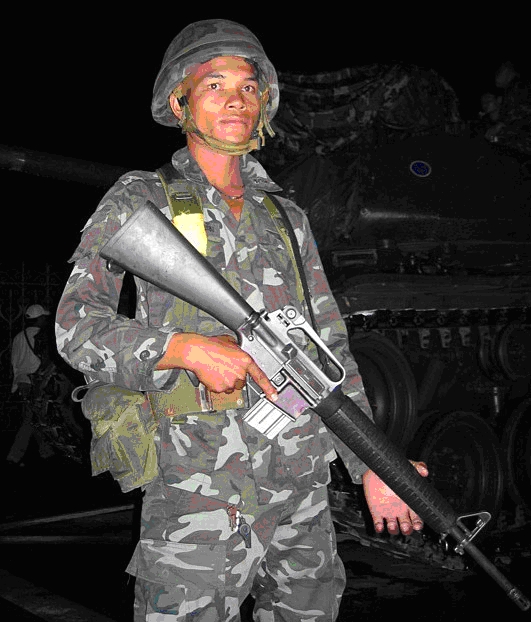 "General Anupong's grotesque and ill-timed visit to Washington, D.C. is shameful and inappropriate; Anupong should receive zero additional funding for U.S. military assistance or training in light of his brutal acts against the freedom loving and peaceful people living in Thailand, including ordinary Thai citizens, Lao Hmong refugees, Karen and Burmese asylum seekers and others," said Philip Smith of the CPPA in Washington, D.C.

Thailand's Army leader and chief, General Anupong Paochinda, was bombarded with over 3 feet of snow, freezing temperatures, howling winds and a barrage of icy criticism today in Washington, D.C. during his official visit to America that follows on the wake of his infamous forced return of over 8,000 Lao Hmong refugees to Laos.

The Center for Public Policy Analysis (CPPA) and a coalition of Lao and Hmong organizations, and human rights advocates, have issued a joint international communique condemning the visit of Thailand's Army Chief-of-Staff, Anupong Paochinda (AKA Anupong Paojinda), and defense officials from the Administration of Thai Prime Minister Abhisit Vejjajiva, to the United States. The high-level visit by General Anupong follows the Thai Army's brutal mass forced repatriation to Laos of thousands of Lao Hmong refugees on December 28th of last year.

"We condemn in the strongest terms the despotic and unnecessary brutality of General Anupong Paochinda, and Thai Prime Minister Abhisit Vejjajiva, in forcing back thousands of defenseless and innocent Lao Hmong men, women and children," said Philip Smith of the CPPA in Washington, D.C.

Smith continued: "General Anupong's grotesque and ill-timed visit to Washington, D.C. is shameful and inappropriate; Anupong should receive zero additional funding for U.S. military assistance or training in light of his brutal acts against the freedom loving and peaceful people living in Thailand, including ordinary Thai citizens, Lao Hmong refugees, Karen and Burmese asylum seekers and others. In fact, it would be most helpful if General Anupong would stay in Thailand where he seems determined to bravely deploy the Army against its own unarmed and peaceful people and others seeking freedom and human rights in Thailand."
http://www.centerforpublicpolicyanalysis.org

"Unfortunately, in turning a deaf ear to the international community, Members of the U.S. Congress and the European Parliament, General Anupong seems to have done more to harm and damage U.S.-Thailand relations that any other single Thai leader in the history of this important relationship," Smith said. "Why would General Anupong willfully defy the many international appeals by Members of Congress and others to His Majesty, King Bhumibol Adulyadej, the King of Thailand, about granting the Lao Hmong refugees asylum until they could be resettled abroad ?"

"We condemn General Anupong's visit to the United States after what he done to the Lao Hmong refugees in Thailand and we urge that no money be given by the Congress to General Anupong in light of the terrible human rights violations he has committed against refugees in Thailand, including the Burmese and Karen," said Vaughn Vang of the Lao Hmong Human Rights Council.
http://www.laohumanrightscouncil.org

The following is the text of the joint international communique:

We condemn in the strongest terms, the deplorable and bloody actions of General Anupong Paochina, in forcing, from 2007-2009, over 8,000 Lao Hmong political refugees and asylum seekers from Thailand to the authoritarian regime in Laos they fled, including some 4,700 he is responsible for forcing back on December 28 of last year. As a Laotian and Hmong refugee predator, and egregious human rights violator, General Anupong, used thousands of Thai Army troops against unarmed and peaceful Lao and Hmong women, children, elderly and persecuted refugees, including those who fled political and religious persecution under the communist regime in Laos. General Anupong is a Laotian and Hmong refugee predator who has preyed upon the innocent.

The Lao and Hmong people have been essential in the defense of the United States and the Kingdom of Thailand’s national security interests, during the Vietnam War and its aftermath. They are important today.

General Anupong has engaged in a pattern of propaganda and distortions to seek to cover-up his violations of the human rights against many of the people of the Kingdom of Thailand, including the Lao, Hmong, Karen and Burmese refugees who have sought political asylum in Thailand.

Therefore, unfortunately, we must condemn General Anupong’s visit to Washington, D.C. and to the Pentagon and other U.S. government departments. We reject, as illegitimate, any potential meeting with U.S. Army Chief of Staff General George Casey, Jr. and urge General Casey to communicate to General Anupong America’s serious concerns about his abuse of Lao Hmong refugees and others in Thailand.

American cannot, and must not, support despotic military leaders in Thailand such as General Anupong who deploy armed soldiers to abuse innocent and peaceful people in the Kingdom of Thailand.

General Anupong’s propaganda and abuses against the Thai, Lao, Hmong, Karen and Burmese and others in Thailand, raises very serious questions about his methods and conduct in the provinces of Southern Thailand and potential human rights violations and potential abuses there that will not serve the interests of the national security of Thailand or the United States. Any use of the Thai Army to brutalization civilians, villagers, peaceful demonstrators and ordinary Thai citizens as well as refugee populations in Thailand does not serve the interests of the Royal Thai Army, the Kingdom of Thailand, the United States or the international community.

General Anupong has discredited himself in the eyes of the international community and the Laotian and Hmong-American community in the United States.

General Anupong’s visit to the United States is disgraceful, highly shameful and inappropriate at this time given his violent role in violation of international refugee and humanitarian law and against innocent Lao and Hmong asylum seekers.

Members of the U.S. Congress and the international community have repeatedly appealed to His Majesty, the King of Thailand, the grant the Lao Hmong refugees political asylum in Thailand so that they could be humanely screened and resettled in third countries that have agreed to take them, including Canada, Australia, France, New Zealand, the Netherlands and others. General Anupong ignored the wishes of His Majesty, King Bhumibol Adulyadej, the King of Thailand, who has always shown the utmost compassion toward the Lao Hmong refugees, and worked to protect and grant asylum to them in Thailand because of their historic role in defending the national security, sovereignty and territorial integrity of the Kingdom of Laos and the Kingdom of Thailand.

U.S. military assistance, and military training assistance, to the Thai Army, as recently suggested by Senator Patrick Leahy and other Members of Congress, should be closely reviewed and sharply cut, until such time as General Anupong, resigns his post in Thailand, or is appropriately removed from office, for his brutal actions against Laotian and Hmong refugees as well as Karen and other Burmese asylum seekers.

In the event of a coup against General Anupong in Thailand during his visit to the United States, he should not be granted asylum in the United States because he boldy and willfully refused the appeals of the international community to grant 8,000 Lao Hmong refugees mercy and political asylum in Thailand and instead forced America’s former allies back to the communist regime in Laos they fled.

No more U.S. taxpayers’ supplied and funded US-made M-16 automatic rifles, or military hardware and training should be provided to General Anupong, since he has ulitized them in Thailand against innocent and defenseless people, including the 4,700 Lao Hmong men, women and children he forced back to Laos in December of last year without compassion or mercy.

General Anupong has brought shame on the reputation of the Armed Forces of Thailand and the Thai Army in utilizing them against ordinary and most vulnerable of people in the Kindgom of Thailand, including the thousands of Hmong refugees he forced back to Laos. His visit to Washington, D.C., at this time is shameful and disgraceful.

Heaven and earth appear to have appropriately also shown their fury and disapproval of General Anupong’s visit to Washington, D.C., and his forced repatriation of Lao Hmong refugees, by unleashing a Siberian winter upon him and dumping over three feet of snow and ice upon his Thai Army delegation’s heads. Providentially, most of General Anupong’s meetings in Washington, D.C., were appropriately canceled in a massive bombardment of snow and ice the likes of which have not struck the area for over 100 years. The fury of this epic ice and snow storm are but a fraction of the anger and condemnation that the Lao and Hmong-American community wishes to express and communicate in opposition to General Anupong’s visit to the United States and his grotesque appeals for more U.S. funding for his brutal actions against peaceful people and refugees, like the Lao Hmong, living in the Kingdom of Thailand.

Issued by the Center for Public Policy Analysis and a coalition of Lao and Hmong non-governmental and non-profit organizations, including: