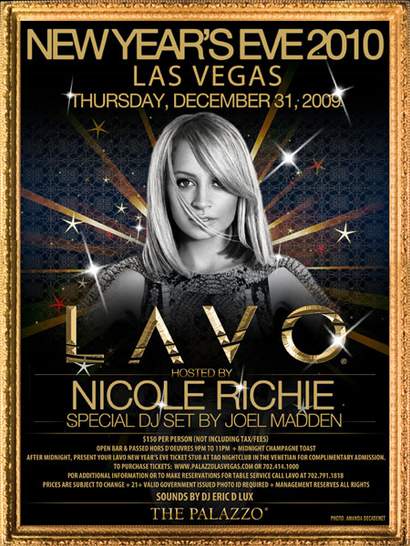 Nicole Richie, former Paris Hilton best friend and reality co-star will be ringing in the New Year in Vegas at LAVO Nightclub. LAVO is a swanky club which boasts one of the most intimate and high energy dance floors in Las Vegas surrounded by table seating and a great bar.

Nicole Richie’s rock star husband, Joel Madden, will be doing a guest DJ set for all the party-goers to dance to. LAVO is known as a celebrity hang out so it is a mystery who else might show up to party with the Maddens.

With a ticket from LAVO complimentary admission to TAO after midnight is given to New Years guests an. The party at TAO is being hosted by another top celebrity, Christina Aguilera. This ticket guarantees two parties for one.

Tickets and details for this event can be found at www.NewYearsEveCentral.com. NewYearsEveCentral.com is a nightlife source giving information on New Years Eve events. It gives extensive descriptions of over 50 events taking place in the NYC area and includes several ticket options including general admission and VIP.
###