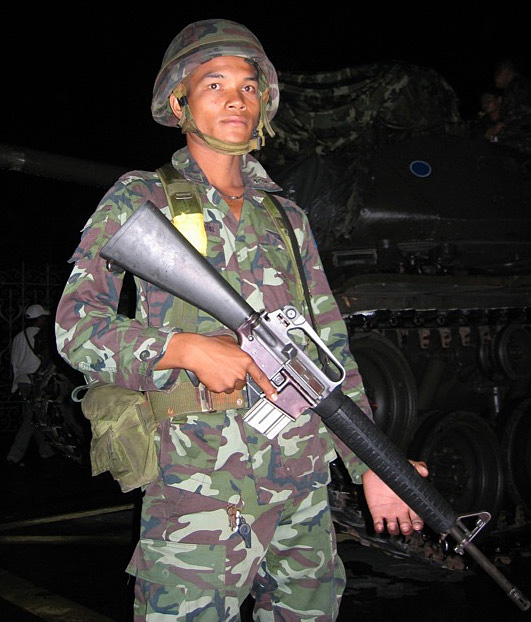 As the result of the ongoing mass forced repatriation of Hmong refugees to Laos, Thailand's Prime Minister Abhisit Vejjajiva and Army Chief of Staff Anupong Paochinda have been accused of serious violations of international law and erasing Thailand's record of compassion toward refugees by senior, current and former, American officials, including Members of Congress, former U.S. Ambassador H. Eugene Douglas and other policymakers.

As the result of the ongoing mass forced repatriation of Hmong refugees to Laos, Thailand's Prime Minister Abhisit Vejjajiva and Army Chief of Staff Anupong Paochinda have been accused of serious violations of international law and erasing Thailand's record of compassion toward refugees by senior, current and former, American officials, including Members of Congress, former U.S. Ambassador H. Eugene Douglas and other policymakers.
http://www.businesswire.com/portal/site/home/permalink/?ndmViewId=news_view&newsId=20091208006445&newsLang=en
http://www.pr-inside.com/anupong-abhisit-s-laos-thailand-refugee-r1598920.htm

Over 4,200 Lao Hmong political refugees and asylum seekers are in the process of being forced from the main camp at Huay Nam Khao, Petchabun Province, Thailand to the communist regime in Laos that they fled. http://media-newswire.com/release_1108513.html

“The United States strongly urges Thai authorities to suspend this operation. We also urge the Lao People’s Democratic Republic to treat humanely any Lao Hmong who are involuntarily returned, to provide access for international monitors, and facilitate resettlement opportunities for any eligible returnee. We will remain engaged in this important humanitarian issue,” said the U.S. Department of State yesterday in statement by spokesman Ian Kelly in Washington.

“Over the last 72 hours, more and more reports have been received about Lao Hmong refugees, including women and children, who have been seriously injured by Royal Thai soldiers as they are being forced back to Laos, according to reports from the main refugee camp in Thailand received by the Lao Hmong Human Rights Council, the Center for Public Policy Analysis (CPPA) and relatives of Hmong-Americans in the camp,” said Philip Smith, Executive Director of the CPPA in Washington, D.C.

One Hmong man who refused to get on a Thai Army truck was brutally beaten by three Royal Thai Army soldiers according to refugee reports received by the CPPA in Washington, D.C. directly from the camp in Thailand yesterday prior to its closure.

Independent journalists have not been given access to the Hmong refugee camp at Petchabun Province during, or prior, to the mass forced repatriation.
http://www.pr-inside.com/open-access-for-journalists-to-lao-r1613131.htm

“Sadly, Hmong-American families in the United States as well as sources inside the Hmong camp at Huay Nam Khao have reported to us that the Thai military effort to force the refugees back to Laos has been very violent and bloody with hundreds wounded,” said Smith.

“One Hmong refugee man, who refused to get on Thai Army truck was bludgeoned to near death by three Thai Army soldiers who surrounded him and repeatedly beat him,” Smith stated. “Currently, Thai Army trucks and buses are heading for the border of Laos at this time loaded with thousands of Hmong refugees who fled human rights violations and political and religious persecution in Laos.”

“Some of the Hmong men wounded yesterday and today are reported to be in critical condition with electric shocks and severe blood loss from repeated blows to the head, face and torso by Thai soldiers armed with a number of lethal and non-lethal weapons, including electric cattle prods, taser-like guns, metal batons, wooden poles and M-16 machine guns,” Smith stated further.

Smith continued: “The Thai military has brutally beaten and seriously wounded hundreds of Hmong refugees in Thailand as it seeks to force them back to the communist regime in Laos they fled. According to reports received from sources inside the main Hmong refugee camp at Huay Nam Khao in Thailand’s Petchabun Province the effort to force Hmong back to Laos has been exceedingly violent and bloody.”

In Congress, the U.S. Senate has urged Thailand to stop the forced repatriation and is considering a review of funding for U.S. military assistance and training to Thailand. Senator Patrick Leahy has made a Senate floor statement about the Lao Hmong refugee crisis in Thailand.
http://www.businesswire.com/portal/site/home/permalink/?ndmViewId=news_view&newsId=20091227005009&newsLang=en
http://www.media-newswire.com/release_1108696.html

“U.S. Senators say that the return of Lao Hmong refugees to Laos by Thailand’s Prime Minister Abhisit Vejjajiva and Army Chief of Staff General Anupong Paochinda may have negative effects on America’s relationship with Thailand, including potential damage to the U.S.-Thai military relationship and the annual Cobra Gold exercises,” Smith concluded.

“Direct sources from within the Huay Nam Khao refugee camp in Thailand report that more Thai army soldiers have arrived and entered the camp to force the Hmong political refugees and asylum seekers back to Laos,” said Vaughn Vang of the Lao Hmong Human Rights Council of Green Bay Wisconsin.

“In recent days, many of the Hmong refugees were seriously wounded by the Thai Army soldiers who have by beating them with shovel handles, heavy clubs and their guns. Many of the refugees are seriously bleeding and many of the men have been beaten so seriously that they cannot walk or stand, and cannot defend their families from the attacking Thai soldiers forcing them onto the trucks and buses.

“The international responses to the reports on December 22, 2009 have resulted in the Thai government setting up a tower in the refugee camp seeking to stop cellular activity within the camp in an effort to prevent communication and any information about the forced repatriation to escape the camp. After setting up the towers, the Thai soldiers within the camp threatened the Hmong refugees that the world will not be able to have access to the events that will be occurring in the next few days to deport these Hmong refugees back to Laos. Thai soldiers further state that the world community will not be able to hear the cries, and see the bloody abuse and brutal torture of the Hmong refugees and will not come to their aid and rescue.

“The reports further state that the number of Thai soldiers has increased to over the number of Hmong refugees within the camp. Also, the Thai government has gathered majority of local nurses to be ready and standing by outside of Huaj Nam Khao Refugees Camp because the Thai government foresees the forced repatriation to be bloody with serious injuries and possible deaths in the next coming days. The reports further state that the Thai soldiers have been ordered to force repatriated all Hmong refugees from the camp completely within the next seven days.

“These innocent Hmong children, women, elders, and civilians are appealing to the United States, United Nation, and United Nations High Commissioner for Refugees, Amnesty International, Human Rights Watch, European Union, Doctors Without Borders (MSF), Reporters Without Borders (RSF) and all international human rights organizations, all countries, and the world community to not give up on them.

“They are requesting for the world to urge the Thai government to cease the forced repatriation of the 4,532 innocent Hmong refugees and to send aid and representatives to monitor the situation in the Huaj Nam Khao Refugee Camp.”

Thailand deployed hundreds of more troops to the Hmong camp prior to the American Thanksgiving Day holiday and in recent days and weeks. Observers feared the repatriation would occur during the Thanksgiving day or prior to the Southeast Asia Games earlier in December. The European Parliament passed a resolution on November 26, urging Thailand to free the Hmong refugees and condemning Laos for egregious human rights violations, including the November arrest of Laotian protest leaders deemed as prisoners of conscience by Amnesty International.
http://www.onlineprnews.com/news/12762-1259190416-abhisit-anupongs-thanksgiving-day-final-solution-to-the-laos-hmong-problem-thailand-moves-more-troops-against-unarmed-hmong-refugees.html/preview
http://www.onlineprnews.com/news/12936-1259340801-ep-thailand-urged-to-free-hmong-refugees-laos-urged-to-free-students.html/preview