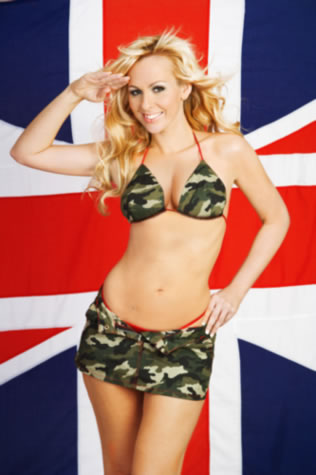 Online PR News – 14-December-2009 – – Lee Mill, Devon - As Christmas approaches, and the nation's thoughts go to the brave men and women of the Armed Forces, 13 gorgeous 'real' girls have stripped for a racy Help For Heroes calendar, in association with sexy underwear retailer, Wickedelic Lingerie.

The 'Wickedelic Sweethearts' calendar features 13 girls who joined 10,000 other hopefuls in submitting photos for a competition to win the chance to become a 'Forces Sweetheart'.

One such girl, Susie Hutson won the overall competition when she polled the most public votes after becoming a Forces Sweetheart in the East Midlands, where she met an Officer, who has now become her partner. As part of her win, Susie won the chance to appear on the calendar cover, and become the face of Wickedelic Lingerie.

Susie said, "Britain has the bravest Armed Forces in the World, and I am so honoured to be a part of the Wickedelic Sweethearts calendar, raising money for the two most important charities in the UK right now - Help For Heroes and Combat Stress."

Wickedelic Lingerie boss and ex-Royal Marine, David Hildrew said, "I understand the physical and emotional strain the brave men and women of our Armed Forces go through, and it's a great source of personal pride for me that we are able to do our small bit, and raise funds for these two vital charities. All our 13 girls are stunning in their own ways, and Susie is a perfect cover girl, and a gorgeous girl to be the face of Wickedelic Lingerie."

The Wickedelic Sweethearts 2010 calendar is available now at www.wickedeliclingerie.co.uk, and costs £7.99. All profits go to Help For Heroes and Combat Stress.

About Wickedelic Lingerie:
Wickedelic Lingerie was formed in 2006, and has become one of the UK's largest retailers of sexy lingerie. The company is based in Lee Mill, Devon, and prides itself on the quality and range of its products. The website now offers more than 1,500 different products. The line includes ladies lingerie such as babydolls, bustiers and corsets, gowns, chemises, camisole sets and thongs, as well as specialising in bridal lingerie. The new expanded range also consists of men’s underwear, fancy dress, plus-size lingerie and shoes.