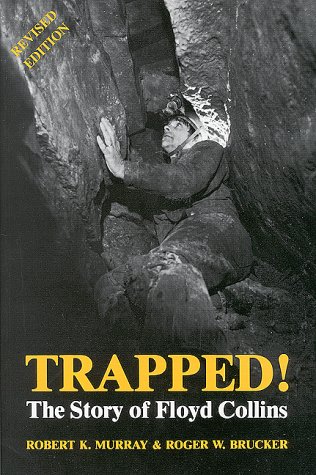 "Trapped! The Story of Floyd Collins" is widely regarded as the most comprehensive and accurate account of the 1925 Floyd Collins tragedy. Film rights to the book have been acquired by producer Peter R.J. Deyell.

Producer Peter R.J. Deyell has acquired the motion picture rights to the book "Trapped! The Story of Floyd Collins" by Robert K. Murray and Roger W. Brucker. The option was previously held by Billy Bob Thornton and was reportedly greenlit by Paramount Pictures in 2006. Thornton's option expired, and Deyell has now stepped up. Deyell is now in talks with interested parties. He said he hopes to shoot the film in Kentucky.

Online PR News – 26-May-2011 – – (Los Angeles, CA) – Producer Peter R.J. Deyell ("Road to Nowhere") and American Biograph Films have acquired the movie rights to "Trapped! The Story of Floyd Collins" by Robert K. Murray and Roger W. Brucker for an undisclosed amount. The book is based on the true story of Floyd Collins, a farmer who was trapped in a remote Kentucky cave, known as Sand Cave, in the winter of 1925, and could not be freed. The rescue efforts attracted thousands of spectators and became one of the most sensational news stories of the early 20th century.

The critically acclaimed book had previously been optioned by actor Billy Bob Thornton and was to be produced by Paramount Pictures with Geyer Kosinski producing, as reported by The Hollywood Reporter in 2006. However, Thornton’s option expired, and Deyell stepped up to acquire the rights.

“This is one of the great American stories,” he said. “Here was a simple man who one minute was on the verge of a great discovery, and the next minute was hopelessly buried alive. Rescue workers were able to crawl down to him. They could talk to him, they could feed him, they could wrap blankets around his shoulders to keep him warm. But nobody could get him out.”

A young reporter for the Louisville Courier-Journal, William "Skeets" Miller, courageously ventured into the cave and interviewed Collins for a series of stories that were syndicated by the Associated Press and carried on the front page of virtually every newspaper in America. Miller won a Pulitzer Prize for his first-person coverage of the ordeal and later worked for the National Broadcasting Company (NBC) in the network’s heyday.

The Floyd Collins tragedy inspired songs, books, a stage musical and the 1951 Billy Wilder movie "Ace in the Hole" (a.k.a. "The Big Carnival"), starring Kirk Douglas. However, Wilder’s film and most early accounts of the events at Sand Cave were based on erroneous newspaper stories, wild exaggerations, and unsubstantiated rumors.

“As good as the Wilder film was, it did not tell the real story of Floyd Collins,” Deyell said. “Wilder changed many significant details, including characters’ names and the location. He made the newspaper reporter a villain, which was not the case in real life. The reporter tried to save Floyd. 'Trapped'is the real deal.”

"Trapped! The Story of Floyd Collins," first published by G. P. Putnam’s Sons and currently published by University Press of Kentucky, is widely regarded as the most accurate telling of the Collins tragedy. The New York Times wrote that the book “offers fascinating glimpses of Collins as an eternal adolescent, who seemed at home in a subterranean world, and of a clan whose rural simplicity was marbled with dark conflicts.” (Ben Brantley, March 4, 1996)

The book revealed details that were not previously known to the public. While researching their subject, authors Murray and Brucker studied hundreds of documents and interviewed dozens of eyewitnesses, some of whom were involved in the rescue attempt or knew Floyd Collins personally. Brucker even risked his life crawling into the cave where Collins died, which no one had done since 1925, to understand why rescue efforts failed.

“It was one of the scariest experiences of my life,” said Brucker, who has consulted for National Geographic Television and is known for his exploration of Kentucky’s Mammoth Cave, the world’s longest. “Most caves are safe, if you know what you are doing, but Sand Cave is very unstable and prone to collapse. While I was crawling through the tight passageway down to where Floyd was trapped, rocks kept falling from the ceiling onto my back. I felt lucky to get out.”

Deyell recently co-produced the award-winning independent film "Road to Nowhere," which was directed by Monte Hellman and written and produced by Steven Gaydos, executive editor of Daily Variety. He is now in talks with prospective talent and producing partners about Floyd Collins. He said that, if possible, he would like to shoot the film in Kentucky.

“I want this movie to tell the real story of Floyd Collins, in the place where it happened,” Deyell said. “Kentucky has some of the world’s greatest caves. I expect to be in touch with the Kentucky Film Commission very soon.”