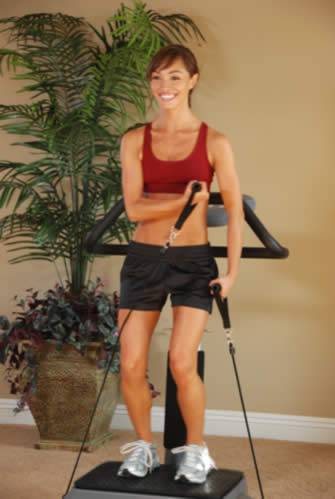 Online PR News – 09-December-2009 – – A new scientific study presented at the European Congress on Obesity, found that overweight or obese people who regularly used vibration training with a calorie restricted diet were much more successful at long term weight-loss and losing the fat around their abdomen compared to those who combined dieting with a more conventional fitness routine.

"These machines are increasingly found in gyms across the industrialized world and have gathered a devoted following in many places, but there has not been any studies proving that they help people lose weight. Our study, the first to investigate the effects of vibration in obese people, indicates it's a very promising approach. It looks like these machines could be a useful addition to a weight control package," said the study's leader, Dirk Vissers, a physiotherapist at the Artesis University College and the University of Antwerp in Belgium.

The researchers divided the study group into four groups.

DIET GROUP: One group was prescribed an individually calculated calorie restricted diet. Dietician visits were scheduled every 2 weeks for the first 90 days and every 30 days for the second 90 days. The dieters were instructed not to undertake any exercise for the duration of the 6 month study.

DIET PLUS EXERCISE GROUP: The second group received the same diet instructions, with the addition of a traditional fitness program. They attended supervised exercise classes twice a week for an hour and were instructed to exercise a third time each week. Their exercise included cycling, swimming, running, step aerobics and some weight lifting exercises.

CONTROL GROUP: A third control group got no diet or exercise instructions.

DIET PLUS vibration exercise GROUP: The fourth group got the diet instructions plus supervised vibration plate training instead of conventional exercise. They were instructed not to do any aerobic exercise during the six-month study period. The physiotherapists gradually increased the speed and intensity of the vibration training each week, as well as the variety and duration of the vibration exercises from 30 seconds for each of 10 exercises to 60 seconds for each of 22 exercises, such as squats, lunges, calf raises, push-ups and abdominal crunches. The average time spent vibration training was 12 minutes per session in the first 90 days and 14 minutes in the second 90 days.

THE RESULTS
Over the year, only the conventional fitness and vibration groups managed to maintain a 5% weight loss, which is what is considered enough to improve health.

DIET PLUS EXERCISE GROUP: The group that got diet plus conventional fitness lost about 7% of their initial body weight in the first six months, and by the end of the study, they had managed to keep off a 6.9% loss. Visceral fat shrank by 18 square centimetres in the conventional fitness group in the first six months, but by the end of the year, it was only 1.6 square centimetres less than at the beginning. Not very impressive.

CONTROL GROUP: The control group predictively gained about 1.5% of their original body weight.

DIET PLUS VIBRATION EXERCISE GROUP: Finally vibration exercise group lost 11% of their body weight during the intervention phase and by the end of the follow-up period they had maintained a 10.5% loss. The vibration fitness group lost 48 square centimetres of visceral fat during the first six months and still had the impressive loss of 48 square centimetres after 12 months.

These are very encouraging results, and this could be a viable alternative to traditional exercise and weight lifting. Vissers explained that vibration fitness works by making muscles rapidly contract, which builds lean muscle mass. People say vibration exercise machines are fitness for lazy people. It may feel like a short cut, but it is real exercise.

Vissers plans further research on a larger group of obese patients confirm how beneficial the machines are. His team is also planning to study why vibration seems to be more effective than aerobic exercise in trimming visceral fat, including whether increased blood flow to the abdomen and hormonal response to vibration might play a role in more efficient fat breakdown. His vibration fitness study was funded by the Artesis University College of Antwerp.

The results were presented at ECO 2009 -- The 17th European Congress on Obesity in Amsterdam, Netherlands.