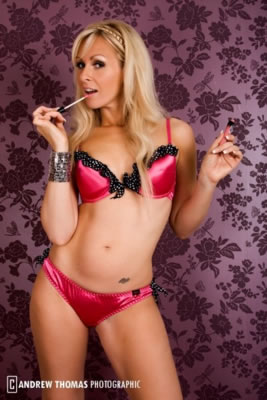 Susie Hutson is the new face and body of Wickedelic Lingerie, the firm is delighted to announce.

The sexy mum-of-one from Hampton Vale in Peterborough beat off competition from 11 other hotties to win the Wickedelic Lingerie Model Search competition.
Susie, 30, will now star in a 2010 charity calendar, with the proceeds going towards military charities Help For Heroes and Combat Stress.

A delighted Susie said: "I am beyond thrilled, this is my ultimate dream and I want to inspire all girls out there to follow there dreams however big or small."

Susie will take part in a number of international advertising campaigns for the Devon- based company.

She only started modelling last year, after wanting to spark a turnaround in her life.
"I have had a lot of bad luck over the last few years – I was left on my own when I was pregnant with Josh, and then was made redundant a week before I was due to have him. I was really down, so this year I decided I had to make a change. I thought about modelling, but everyone said I was too old," she told the Evening Telegraph in October.

"That made me even more determined to succeed, and I got a job at the modified car show at the East of England Showground.

"I then saw the competition to become the face of Wickedelic, and when I found out I had been shortlisted, I could not believe it. More than 800 girls applied, so it is a real achievement to get this far. I just need people to vote for me now."

To win the competition Susie embarked on a massive promotional campaign, which included her becoming RAF Wittering's official "sweetheart".

She also took part in a sexy photo shoot at Peterborough United’s London Road stadium in an attempt to drum up support from the town's football supporters.

Susie will now be aiming to follow in the glamorous footsteps of Adriana Lima, Amy Lynn Grover and Gisele Bundchen as she looks to become one of the world’s leading lingerie models.

About Wickedelic Lingerie:
Wickedelic Lingerie was formed in 2006, and has become one of the UK's largest retailers of sexy lingerie. The company is based in Lee Mill, Devon, and prides itself on the quality and range of its products. The website now offers more than 1,500 different products. The line includes ladies lingerie such as babydolls, basques and corsets, gowns, chemises, camisole sets and thongs, as well as specialising in bridal lingerie. The new expanded range also consists of men’s underwear, fancy dress, plus-size lingerie and shoes.