One of the many effective classes held at Keppner Boxing.

“We believe in coaching our members for success and making a real positive impact on their lives. In the same way we are here to guide our franchise partners on a path to successful business ownership and a fulfilling and healthy life.”

Keppner Boxing aims to first expand in the Southeastern United States but is open to national queries. The company has strategically developed a franchise model that can be easily replicated by health and fitness enthusiasts with basic business knowledge. Keppner Boxing holds to the inspirational mission to "positively impact as many lives as possible through the discipline of boxing and fitness in a safe and supportive environment." According to their franchise webpage, the franchise system includes training, easy-to-implement social media tactics, site selection guidance, ongoing operational support, and several other perks.

Husband and wife team Keith & Lissa Keppner first founded Keppner Boxing as a way to help others gain phenomenal conditioning, overcome health issues, and teach the sport of boxing in a non-threatening way. The concept focuses on being a place for people of all fitness levels to come and learn the sport. From people looking to increase their health and fitness to people looking to be competitive Boxers, Keppner Boxing is for everyone who is looking to grow and challenge themselves.

According to Keppner, the gym is set apart from others in the industry because the team looks to help clients beyond just physical fitness; they focus on working on mental and emotional well-being as well. This focus combined with the proven business model, says Keppner, makes for a sustainable growth model and solid footing in the lucrative fitness industry. "This opportunity has a relatively low start-up cost and equipment investment, hence, there’s the potential to be cash-flow positive just a few months after opening," stated Keppner. The company also shares its lead generation secrets, proprietary operating systems, and proven Boxing Coach Curriculum with every franchisee.

Keppner has an impressive boxing and coaching background, producing Golden Glove Champions for 2013, 2014, 2015, 2016, 2018 & 2019 since the start of their careers. He has also trained Pro Boxers who have fought on ESPN, Showtime, and Telemundo. He is a radio show personality on 93.3 and talks about the importance of a powerful philosophy, business, and personal growth to his audiences. "We believe in coaching our members for success and making a real positive impact on their lives," states Keppner. "In the same way, we are here to guide our franchise partners on a path to successful business ownership and a fulfilling and healthy life." 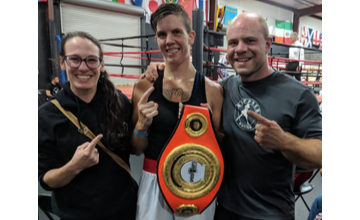