DA ASIAN HIP HOP, a hub for Asian artists, is encouraging unity and providing a platform to connect people of color through hip hop music.

Online PR News – 07-July-2020 – New York, New York – DA ASIAN HIP HOP (DAHH) showcases Asian hip hop and R&B artists. DAHH's goal is to share with the world the experiences and cultural upbringing of Asian Americans. DAHH hopes to connect cultures and people from different backgrounds as DAHH shares artists' stories that are expressed through music because these are not just Asian stories, but human stories and through hip hop Asian artists voice their stories.

With recent events surrounding Black Lives Matters, DAHH is on a mission to create unity between the Asian and Black community by partnering with a Black Lives Matter organization, The World Is Watching - The World Is Watching is a global coalition of international youth on a mission to end police violence and institutional racism in the United States. DAHH has compiled and provided a list of resources for Black Lives Matter, sharing Black artists' stories, and hosting online events such as an online fundraiser concert called, 'WE STAND WITH YOU' to support the Black community.

“Discrimination against Asian and Black communities has been on the rise it is now more important than ever to share Asian and Black stories and voices with the world. - DA ASIAN HIP HOP”

DAHH's global platform is a place for Asian rappers and singers to share their stories and express their artistry. As DAHH continues to connect artists, producers, and creatives worldwide, DA ASIAN HIP HOP community stands against all forms of racism and injustice giving voice to not only Asian artists, but all artists of color.

"We are DA ASIAN HIP HOP. We showcase Asian hip hop and R&B artists from across the world. We are influenced by Black culture and music and our playlists would be empty without Black artists or Black influenced artists." - DA ASIAN HIP HOP

DAHH started because of the lack of Asian representation in mainstream media, particularly in the U.S. hip hop scene.

DAHH started last May and since then has rapidly gained over 4.6k followers on Instagram and over 4.8k followers across all social media platforms. DAHH has also attracted support and following from well-known Asian artists such as MC Jin, Bohan Phoenix, Chow Mane, NITEMRKT and CHOPS, an Asian American hip hop producer, rapper and former member of the Asian American Hip-Hop group, the Mountain Brothers.

"Discrimination against Asian and Black communities has been on the rise, it is now more important than ever to share Asian and Black stories and voices with the world." - DA ASIAN HIP HOP 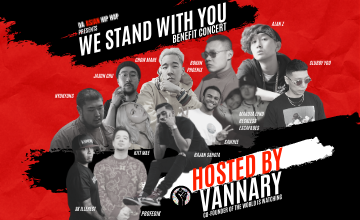