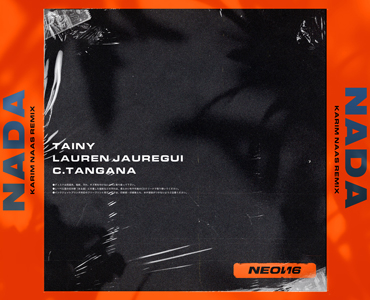 ‘Nada’ featuring Lauren Jauregui and prolific Spanish rapper C.Tangana, was originally released on February 20th as the first single from Tainy’s debut solo EP “The Kids That Grew Up On Reggaeton: Neon Tapes”. The single has accrued over 15 million streams and views combined since its release.

“Karim Naas official remix of Nada is poised to take over the charts.”

Naas’ experimental creativity, masterful production style, attention to detail and instinctive talent for boosting endorphins through sound result in a powerful remix that is poised to take over the charts.

Leading a new wave of Latin music for over a decade, notorious producer Marco Masís Fernández, artistically known as “Tainy,” has been the mastermind and key component behind some of the most iconic Reggaeton hits. A repeated Latin GRAMMY© and BMI Award Winner, Tainy has been churning out career-defining hits for countless artists, including the genre’s pioneers like Daddy Yankee, Wisin Y Yandel and Don Omar and others and more recently, global hit “I Like It” by Cardi B feat. Bad Bunny and J Balvin and “No Es Justo” by J Balvin feat. Zion y Lennox. 2019 continues to be a year of constant success for Tainy. Beginning with his collaboration with Benny Blanco, Selena Gomez and J Balvin for “I Can’t Get Enough,” which was his debut as an artist. The song quickly took a peak in the Billboard charts in its first days after its launch. Tainy produced OASIS with BAD BUNNY And J Balvin, which has dominated global charts and was key to Tainy's position as the number one Latin producer on the Billboard charts for 27 consecutive weeks. Tainy also collaborated with Bad Bunny on the summer anthem "Callaita" whose success rose to high levels. Almost immediately after, he released his global hit “Adicto” alongside Anuel and Ozuna which went on to receive multiple Platinum and Gold certification in 8 countries and accrued over 1.2 million streams combined and over 555 million views. The young artist/producer continues to dominate the Anglo market with songs like “Lento”, Lauren Jauregui’s debut Latin single, “Feel It Too” featuring Tory Lanez and Jessie Reyez and on the production side Justin Bieber’s “Habitual”. His latest release is his debut EP titled “The Kids That Grew Up On Reggaeton" delivers 7 powerful tracks with some of today’s most promising up and comers from around the world.

Tainy is undeniably a major influence in the Latin Urban movement that is reinventing music and will continue to transform and push the culture forward on a global scale.

Karim Naas is an electronic dance/club music producer and DJ from Paris, France. Born in 1999, the 20-year-old artist is a dance music prodigy of his generation. In four short years, Naas’ experimental creativity, masterful production style, attention to detail and instinctive talent for boosting endorphins through sound have proved to be a winning formula for making a hit dance record. Signed at only 16 years old to French music label Scorpio, under then-name Busta K, the artist met professional success early on, scooping up production awards and releasing viral singles including remixes for renowned international artists such as J Balvin. His official remix of ‘Mi Gente’ garnered millions of international streams in 2017 alone. Now producing under his real name, Naas has dropped four infectious singles in 2020 - including “Threw A Party" ft. KTK, a wildly euphoric pop melody injected with Naas’ signature production magic, “My Love” ft. Bea Moon, a haunting club hit with a pulsing backbeat and percussive sweep, “All Night” ft. Zach Sorgen, a high- energy dance track inspired by L.A. nightlife and most recently the euphoric pop infused club anthem ‘Up’ featuring Myah Marie, and three official remixes - ‘Calling On Me’ by Sean Paul and Tove Lo, ‘Not My Baby’ by Inna and ‘L.A Traffic’ by Littgloss.

Thanks to his ability to masterfully create infectious dance records that electrify and inspire, Karim Naas is meant to become a key figure in the international dance music scene.