Online PR News – 18-May-2020 – Hollywood, CA – The Shining the Light Television is an engaging, fun, and educational show bringing awareness to issues which impact today’s youth and young adults.

The show will premiere the third week of May, 2020. This entertaining series will address issues that impact the lives of youth and young adults to share their life experiences.Produced by Alan Santana and Dyllon Thomas Gentry, the show will explore topics such as Bullying, Relationships, Music, and the influences of Social Media. Every segment will feature a healthcare professional who will address issues such as substance abuse, gender identity and positive self-image.

Shining the Light’s concept was borne out of Alan’s passion to reach youth and young adults and to inspire and direct them towards a successful pathway.

“Tell me and I forget teach me and I may remember involve me and I learn.”

The show will premiere with World Wrestling Entertainment Hall of Fame Wrestler, Rikishi (aka Solofa F. Fatu Jr.). This popular athlete will speak candidly on bullying and ways for youth to navigate and protect themselves from bullies. Teen guests on this show will include Brandyn Gentry and Kody Lynch.

Alan’s resounding, gregarious, and loving personality provides an interesting perspective to topics which are often overlooked. He incorporates his own natural affinity for getting both adult and youth guests to speak freely about their lives. Using his own experience as a multitalented commentator, public speaker and, serial entrepreneur, he provides the audience with a clearer understanding of challenges facing youth. He was recently inducted into the National Boxing Hall of Fame and uses his numerous relationships within the industry to support his No Teen Riders Non-Profit Foundation. His 20-year boxing career began when he was 8 years old, earning a place on the California/USA Boxing team. During his amateur stint he won many state and local titles and recorded over 100 plus fights. His professional career was unexpectedly hampered after a serious car accident. However, he continues to maintain a relationship today in boxing as well as being the voice for many ex-professional or retired fighters. He works diligently to bring to light the financial hardships and health related issues these former athletes are facing. Alan is the author of a book called "UNPROTECTED: a Tactical Approach to Boxing, Business and Life” and is currently available.

“Tell me and I forget teach me and I may remember involve me and I learn.”

Alan's purpose driven life includes his commitment to encouraging sports activities that break down cultural barriers and to improve their self-esteem. Alan is married and a father of four.

About the Show’s Producers:

Alan and Dyllon formed a unique partnership after connecting at the Cannes Film Festival. Alan found Dyllon to be a very astute, young, talented individual and with a the ability to connect with youth. His values aligned with Alan’s goals and vision for a show that would appeal to both youth and adults. Dyllon became interested in producing a few years ago while working for author and motivational speaker Lisa Nichols. He is originally from San Antonio, Texas and moved to Los Angeles to pursue a career in film and television production.

A preview of the show can be seen on YouTube. 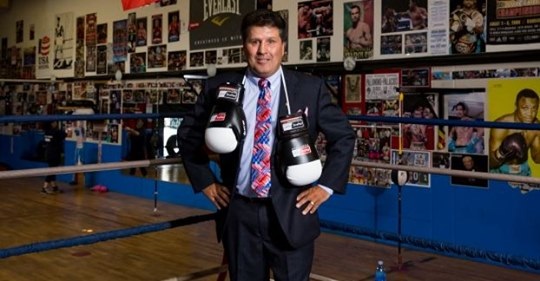