A newly released poll of U.S. workers shows that the COVID crisis has boosted employee motivation, but also added concerns about companies' safety and agility.

Online PR News – 29-April-2020 – NEW YORK, NY – A newly released poll of U.S. workers, taken in the crucial early days of the nation’s response to the pandemic, reveals that while the crisis has caused a renewed sense of purpose and dignity among workers, many still see safety and agility challenges in their workplaces.

The poll of 2,000 American workers, conducted by culture-management firm CultureIQ from March 20-April 1, was taken a time when most states’ stay-at-home orders took effect, millions of businesses shuttered and laid off or furloughed workers, infection numbers soared and hospitals began to overflow with critically ill coronavirus patients. This survey is the U.S. edition of CultureIQ’s annual Global Workforce Culture Survey.

Some poll results pointed to red flags in how companies are handling the crisis and pose concerns as employers begin to consider when and how to reopen places of business:

- At the time of the survey, 7% of respondents indicated that their organizations had not taken new steps and that it was “business as usual”, indicating that some were slow to respond. While a small percentage, if you consider that around 129 million American adults are employed, that 7% adds up to about 9 million people whose employers had not taken any action to protect or support their workforce during a time in which pandemic numbers were rising steeply.

“Our survey shows that this unprecedented crisis provides an opportunity to rally employees around a higher purpose and get work done CultureIQ CEO Tony Jaros says.”

- Similarly, just 54% of workers said that decisions impacting their jobs were made without delay, a decrease of 4 percentage points from 2018/2019, indicating that businesses may not be keeping up with the pace of change required in the crisis.

- Safety is also a concern. Though 67% felt that safety was a priority with immediate supervisors, this marked a 4 percentage point drop for the sample as a whole. Respondents with less formal education (who were also more likely to say that they continued to be exposed to coworkers and customers during this time frame) had a 7 percentage point drop. Likewise, these same workers showed a 6 percent decline in feeling that Senior Leadership demonstrates its commitment to compliance.

However, despite dire circumstances faced by many workers in this time period, items that showed gains over data from the two previous years give a sense that employers may have a unique opportunity to “rally the troops.”

Further, when organizations showed their concern in proactive ways (such as taking protective measures or offering additional support ) scores showed a general pattern of “lift” by 10 percentage points or more across a variety of items and topics, while organizations who did nothing were “penalized” with less favorable employee attitudes.

“Our survey shows that this unprecedented crisis provides an opportunity to rally employees around a higher purpose and get work done,” CultureIQ CEO Tony Jaros says. “When leaders meet that opportunity with clear direction and support, they’ll help build the strong culture that companies need to get them through the unpredictable months ahead.”

Having leaders show concern for employees is clearly associated with a more positive work culture. And doing so may be most important for leaders of employees who have been on the frontlines during the COVID-19 outbreak, exposed to other people not because of choice but because of necessity. Now is the time to show your people just how important they are to your business, but also to your mission for customers and the community.

CultureIQ Global Workplace Culture Survey (US installment) of 2,000 Americans working full- and part-time was taken from March 20-April 1 and has a margin of error of plus or minus 3-4%.

CEO Tony Jaros and CultureIQ Principal Strategists Diane Daum and Paul Mastrangelo available for comment - please contact kathy.jones@cultureiq.com with any additional queries or to to arrange an interview. 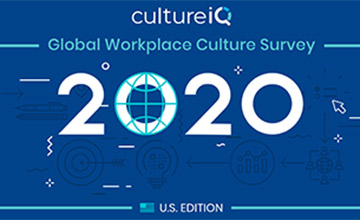