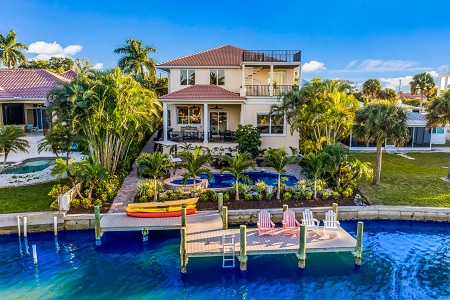 Online PR News – 21-April-2020 – SARASOTA, FL – Success is not a coincidence, but there were enough coincidences surrounding the sale of real estate broker Debra Lichter’s recent listing to make anyone wonder.

First the facts: Debra Lichter, Broker/Owner of Sarasota Beach-to-Bay Real Estate, represented the sellers, David and Nancy Wood, in the $2.7 million sale of a waterfront property at 443 S. Polk Drive on Lido Key in Sarasota, Florida. Debra received the offer at an open house just three days after listing the property.

The buyer, Philip Mekelburg of EE Hollywood FLA LLC, boarded a plane from Atlanta and attended the open house the day after seeing the listing on Zillow. He was represented by Linda Weber of Coldwell Banker Realty on Longboat Key.

By chance, Zillow senior business consultant Raquel Antolin just happened to be in town from Seattle, called to invite Debra to lunch, and ended up at the open house. She was so excited about the property that she live-streamed a video back to Seattle, enhancing the property’s already high visibility due to Debra’s long-established Zillow Premier Agent standing.

“It turns out that the buyer loves Zillow and we ended up talking for a long time at the open house about Zillow analytics,” Raquel said.

Raquel is quick to credit Debra’s preparedness and professionalism as the listing agent. “Just three days after listing the property, she already had an open house. The property was immaculate and well-staged,” Raquel said. “Debra spoke to prospective buyers as if they were already living there. I wanted to live there! She knows what she’s doing.”

Lichter is a multimillion-dollar producer and luxury waterfront specialist with experience in Florida real estate development, investment and residential sales. A Realtor Emeritus, she is active in her industry, serving as 2018 Chair and 2017 Vice-Chair of the RASM Realtor-Attorney Joint Committee (RAJC). She served three terms on the Public Information Committee, which she co-founded in 2006 and chaired in 2006 and 2007. She was appointed to a three-year term as a non-attorney member of the Bar Association Grievance Committee for the 12th Circuit. Her efforts on behalf of the industry and board earned her the Realtor Association President's Award in 2007. Clients rewarded her service by voting her a Five Star Real Estate Agent for best in customer satisfaction. She was a founding parent of Sarasota Crew and an MIT Parent Connector. Debra can be reached at (941) 350-7104 or debralichter@gmail.com.