Leading UK Wealth Management companies and individuals working in the sector, presented with awards at The Guildhall in London by Natasha Kaplinsky.

Natasha Kaplinsky presented David Esfandi with the CEO of the Year Award. The Award was in recognition of his leadership in the commercial acquisition and successful integration of three businesses, which have effectively doubled the size of Canaccord Genuity Wealth Management’s business.

Julius Baer’s Patricia Astley was named Female Wealth Manager of the Year while Simon Reeks from Tilney secured the similar male accolade. David Nicol was presented with a Lifetime Achievement Award after his time at Brewin Dolphin which saw AUM increase from £26bn to over £48bn.

In addition to winning the Regional Wealth Manager of the Year for Southern England, Redmayne Bentley’s Darren Hirsh and Fraser Robb picked up individual awards.

“At the annual City of London Wealth Management Awards held at the Guildhall Natasha Kaplinsky presented David Esfandi with the CEO of the Year Award. The Award was in recognition of his leadership in the commercial acquisition and successful integration of three businesses which have effectively doubled the size of Canaccord Genuity Wealth Management’s business.”

“Recognition at COLWMA is now firmly established as the place to be for companies and individuals in the Wealth Management sector delivering exceptional levels of service. It is the public which decide the winners of company awards and this year over 33,000 votes were polled which is a new record. In addition, over 100 nominations were put forward for individual awards. All winners and nominees have done extremely well and are to be congratulated.”

David Nicol, CEO of Brewin Dolphin, who was presented with the Lifetime Achievement Award for his contribution to the wealth management sector, said
“I am honoured to accept this award. As I look back over the past 7 years, I am proud of what we have achieved, including almost doubling AUM. We continue to nurture our clients, guiding them through often very complex financial situations to ensure they have good financial outcomes and the freedom to have the lives they want for themselves and their family.”
The support of corporate event partners plays an important role in the organisation of the City of London Wealth Management Awards. Alberto Cuccu, CEO of Objectway Ltd, a long-standing supporter of Goodacre’s industry functions, said

“Objectway could not miss such an important occasion that recognises the highest levels of service and quality in the UK's Wealth Management sector. This awards ceremony’s mission is very much in line with our goal of bringing to Wealth Managers high-performing software solutions and services, based on customer centricity, sound experience and product innovation.”
Notes for Editors

The City of London Wealth Management Awards (COLWMA) recognise, promote and celebrate quality of service from Wealth Management companies and individuals. Winners of the company awards are determined by an online, public vote which took place between 6th December 2019 and 31st January 2020. Individual awards are based on the number of nominations received, reasons provided with each nomination and information in the public domain. The process is overseen by an independent panel of judges. 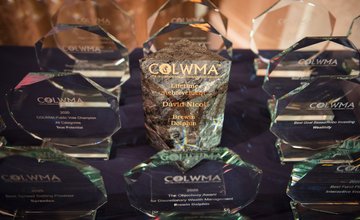