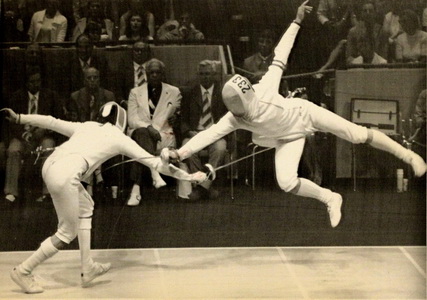 New book presents history, images, and memorabilia of more than 100 years of Olympic and world championship fencing, as collected by Olympic/world champion.

Online PR News – 02-March-2020 – San Jose, California – It’s one of the world’s first modern Olympic sports, with a deep history of legendary characters winning world and Olympic gold medals. The sport is fencing, and for more than 100 years it has been an iconic part of the Olympic Games. Maestro George Pogosov, co-head coach at Stanford University and Olympic gold medalist and six-time world champion, has spent a lifetime collecting memorabilia of world and Olympic fencing in the form of autographs, photos, and other collectibles. “A Legacy of Fencing,” a 150-page coffee-table style book, presents this massive collection with thousands of images and rarities of the fencing world.

Browsing “A Legacy of Fencing” is to take a journey through time, through the eyes of a fencing master and to see letters to coaches, Olympic Games tickets, old score cards, postcards, and personally autographed photos of the characters and stars who have dominated the sport since the 1800s. Whether the reader is a fencer or not, it’s a fascinating step back into time and a closeup look at an Olympic sport and its impact on the world.

“It has been my personal passion to preserve the incredible history of fencing,” said Maestro Pogosov. “Whether it’s children seeing the history of the sport for the first time or a veteran fencer seeing images of his first coach or fencing idol, there’s something for anyone who ever loved swords and Olympic sports in this book.”

Sold only in a limited edition, the book may be purchased via the website http://www.FencingLegacy.com, where copies are available signed personally by the author.