Online PR News – 06-June-2019 – Fairfield, CT – Product Ventures of Fairfield, CT is honored to have contributed to the 75th anniversary of D-Day with the branding of a limited edition commemorative beer can for the Remember Honor Salute Foundation and Home of the Brave. The historical significance of the D-Day invasion cannot be overstated and marked the turning point of World War II with the allied invasion of Normandy, creating a two-front war for Hitler that ultimately led to the fall of Nazism. It was due to the harrowing sacrifice and courage of those who stormed the beaches or dropped from the sky on that fateful day that changed the course of history. 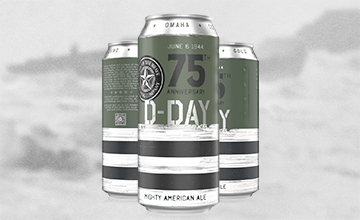 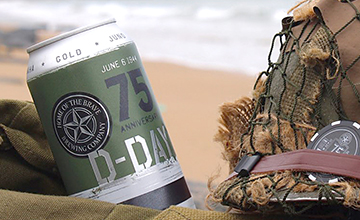 Product Ventures is keenly aware of the distinct honor and privilege it is to contribute to the commemoration of this historic event and designed the package with mindfulness and respect. "I'm proud to apply the talents of my organization to commemorate this day of days with a moment of reflection", says Peter Clarke CEO & Founder of Product Ventures. This limited edition commemorative can is creatively adorned with the iconic allied invasion markings of alternating black & white banding and the stencil font of D-Day is strategically and prominently placed on top of the markings like the cliffs of the Normandy beaches. The distressed effects on the can symbolize the struggle with an impressionist abstraction of the sea born invasion, and the embossed rivets provide a tactile feature that embodies the maritime and aircraft war production effort. The neck of the can proclaims the five invasion beaches of Utah, Omaha, Gold, Juno, and Sword and the back of the can displays an excerpt from General Dwight D. Eisenhower's Operation Overlord pre-invasion speech to the soldiers, sailors, and airmen of the Allied Expeditionary Force. The Home of the Brave Brewing Company logo is given prominence and adorns the pack like a badge of honor. "Product Ventures has been a tremendous help with our mission to honor the sacrifice and victory of our nation's great servicemen and women. First with the creation of the limited edition beer bottle commemorating the 75th anniversary of the attack on Pearl Harbor and now with their 75th anniversary of D-Day limited edition can, we hope to draw attention and remembrance to these historic events", says Glen Tomlinson founder and curator of the Remember Honor Salute Foundation and Home of the Brave.

With each passing year, as we lose more and more of the "Greatest Generation," it becomes increasingly important to do our part to remember the sacrifices made by veterans to secure our future. D-Day irreversibly changed the course of World War II and marks an indelible moment in history that the passage of time can never erase. It is Product Ventures' distinct honor to be trusted with the worthy mission of commemorating this day of days in partnering with the Remember Honor Salute Foundation and Home of the Brave Brewing Company.

About the Remember Honor Salute Foundation and Home of the Brave
The Tomlinson family started Home of the Brave in 1991 in conjunction with the 50th Anniversary of the attack on Pearl Harbor. With the help of the Pearl Harbor survivors, they created Home of the Brave Tours & Museum, a one-of-a-kind WWII Military Base Tour along with the largest private collection of 1940's memorabilia in the Pacific. As curators of this extensive collection, the Tomlinson's have received numerous awards and accolades for their work in educating the public about the rich heritage, sacrifices and traditions of the United States military. The Home of the Brave Museum serves as the steward and repository of Hawaii's historical artifacts and memorabilia pertaining to the United States military during WWII. The extensive collection exists to preserve wartime legacies, as well as to honor the sacrifice and victory of our nation's great servicemen and women. Their goal is to provide an interactive learning center to promote awareness, gratitude, and documentation of America's military heritage for public interest and educational purposes. The Remember Honor Salute Foundation is a non-for-profit organization that enables donations for the continued support of Home of the Brave, the Home of the Brave Museum and their educational programs.