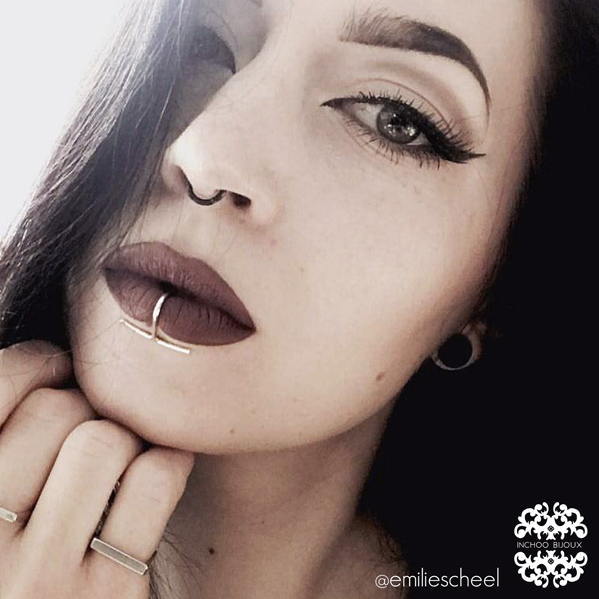 The decision to participate in GBK's Pre-Oscars Gifting Suite was an opportunity for Inchoo Bijoux to connect with influencers and press while showcasing its popular Fake Lip Rings and Moon related, celestial inspired jewelry.

In a statement Inchoo Bijoux founder Astrid Apissoghomian said, "Our Fake Lip Rings are our own innovation; we hope this Oscars exposure will intrigue trend setter researchers. Our Moon Earrings touch on the gothy, witchy, punky vibe and offer a wink to the current [re]popularity of Magical Girls.

“We want to embellish your favorite traits.”

Inchoo Bijoux's adjustable Fake Lip Rings are comfortable and can be easily be worn while eating, drinking or talking. Each lip ring is individually handcrafted at Inchoo Bijoux's Montreal studio, and reflects the hand of the maker. The Sterling Silver Moon Earrings were designed specifically for this Oscars gifting event and have sparkly Swiss CZs that reflect light beautifully.

Giftees will find their lip ring and earrings creatively packaged in Inchoo Bijoux's signature matte black box, which along with the jewels, contains company information and fun drawings from Miss Emiwan (@missemiwan on Instagram).

Inchoo Bijoux was born from Astrid Apissoghomian's love for poetry and intricate ornaments. It reflects her lifestyle and her many extravagant passions. She loves dark, alternative fashion inspired looks, while at the same time embracing all things fashionista and extravagant. Her world flirts around skulls, taxidermy and macabre-inspired themes, as well as statement haute couture jewelry. She loves to create using the body as a canvas. For Astrid, Inchoo Bijoux is the perfect balance between Goth and Glamour.

With a focus on raw and refined looks, Inchoo Bijoux jewels are made to be worn in chic, luxurious environments as well as for everyday casual occasions. They are designed to highlight features, be seen, and add an edge to any look or outfit.

Astrid's message is to be your sexy self, whoever and however you choose to define yourself. "Be creative, be spooky, be glittery, be brave, be powerful, be magical, be inspiring," said Astrid in a statement. "We want to embellish your favorite traits."

Inchoo Bijoux is available to purchase online at http://http://www.inchoobijoux.com and at select live events in the Montreal area. Inchoo Bijoux has been featured in numerous publications, including Mademoizelle aime le style, ElegantWedding.com, and HuffingtonPost.com. Inchoo Bijoux jewelry has been submitted for consideration of use to television shows such as Orville, Jessica Jones and Ozark. It has been gifted to @kathwranovich on Instagram, @Lemosmarion on Instagram, and @lou.von.bright on Instagram.

For more information about The Artisan Group, visit http://www.theartisangroup.org.

Inchoo Bijoux (http://http://http://http://www.inchoobijoux.com) isn't a simple ornamentation, it's a jewel combining romanticism and eccentricity; it's the mystery of a feminine symbol that's not afraid to show a darker side. Every piece becomes a unique poem, unveiling force and finesse through noble materials.